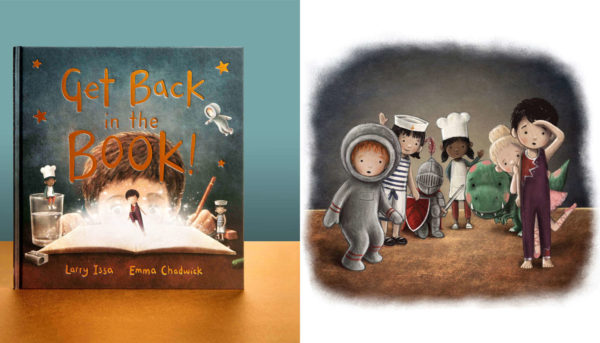 “Get Back in the Book!” by Larry Issa has only been in circulation for less than a year but it’s already sold more than 1,500 copies around the Northern Virginia area.

Issa’s picture book is about a young boy named Danny who writes his own book but catches the characters trying to sneak out of the pages because they think the book is boring. Danny ends up teaching his creations the value of books and convinces them that their happy place is within their own story.

Issa told Tysons Reporter that he hopes the message resonates with kids, and they take away a deeper appreciation for literature.

“A lot of my family members are teachers, and one complaint is that reading levels are going down,” he said.

Issa, who is from the McLean area, said he wants to encourage kids around the area and globe to love literature just as much as he did as a kid.

All of the characters in the book are inspired by things he loves doing or what he wanted to be growing up. The dinosaur tends to be a popular character, but Issa said the astronaut is his personal favorite.

In November, Issa won the Moonbeam Children’s Book Award in first-place for the picture book category.

When it came to the book design and art, Issa approached British artist Emma Chadwick with an idea for a partnership after discovering her art portfolio on Instagram.

As a designer, Issa had a very distinctive plan for what he hoped the book would become and said that he and Chadwick worked well as a cohesive team after accepting the offer. They agreed that a darker color scheme would suit the story well since the book takes place on a school night in the child’s bedroom.

When not working as a professional designer, Issa spends a lot of his time performing readings to school kids and selling his books at local shops, markets and festivals.

As a self-publisher, Issa began giving advice to others who want to publish children’s books and began his new brand — Kalmus Books. He said some of his mentees are planning to publish their books under Kalamus in the future.

Issa told Tysons Reporter that the best advice he can give future authors is to just put themselves out there and start writing, adding that his book went through more than 25 rounds of edits before publication.

He currently coordinates with schools and local charities to give away copies of his book to students in need and seeking donation sponsors to follow in the footsteps of The Closet in Herndon, who recently purchased 100 copies.

People can email Larry Issa if they are interested in helping the cause.

“Get Back in the Book” is available in hard-cover and can be purchased in person at a variety of popups for $18.99 or online, for $21.

Issa said he made the copies slightly more expensive online because he wants to encourage the community to check out markets and book stores in-person.

Although he has received requests for digital and soft-cover copies, he said he doesn’t want to release them just yet because these formats weaken the storytelling experience.

“We are all about the aesthetics,” Issa said.

If anyone wants to meet Issa and purchase their own copy of the book signed on-site, they are welcome to stop by the holiday market in Tysons Corner Center, where he can usually be found during mall hours until Tuesday (Dec. 24), when the pop-up shop closes.

“Get Back in the Book” can also be purchased at Scrawl Books (11911 Freedom Drive).

He told Tysons Reporter that hints or “easter eggs” for the upcoming book can be seen in drawings from the main character in”Get Back in the Book.”

Read more →
More Stories
Meet the Members of Fairfax County’s Board of SupervisorsAsk Val: Tips for Keeping Your Home Safe During the Holidays