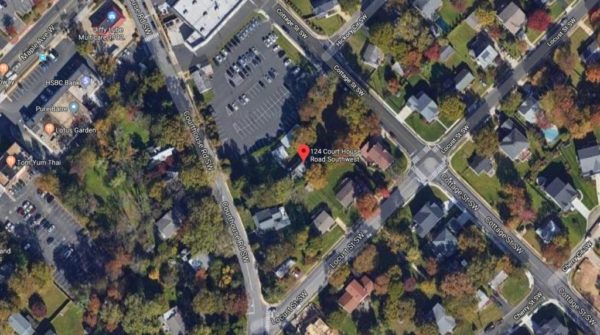 The Town of Vienna recently bought the property of the late former mayor — and may possibly turn it into a park.

The town was the winning bidder of the Nov. 22 auction hosted by McGuire Group, LLC for the property at 124 Courthouse Road SW for $1,438,500, including a 5% buyer’s fee, according to a press release from the town.

The property was once the home of former Mayor Charles Robinson and former Councilmember Maud Robinson.

“Both of the Robinsons had an outsized impact on the Town of Vienna and contributed an enormous amount of their time, energy, and heart to creating a more personally connected and livable community,” Mayor Laurie DiRocco said.

Following discussion in a closed session earlier in November, Town Council authorized Town staff to bid on and purchase the property at a cost not to exceed a certain limit. Last night Town Council officially authorized the purchase.

The nearly three-quarters of an acre property includes a single-family house and outbuildings. The property was made available via auction by the executor of Maud Robinson’s will; Robinson passed away March 11 this year at the age of 96. Her husband served as Vienna’s mayor for 24 years, from 1976 until his death in 2000…

The Town tentatively plans to use the property as parkland, but additional uses will be considered as well.

“Maud Robinson was a champion of parks and conservation,” DiRocco said. “The town felt it appropriate to keep her and Charlie’s property ‘in the family’ and to utilize it for the benefit of the entire community.”