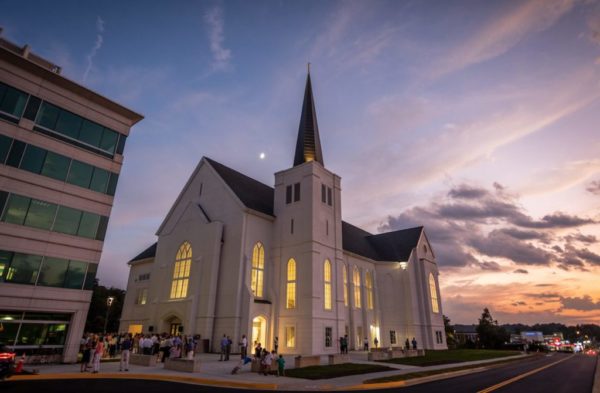 The new location (6565 Arlington Blvd) is nearly complete and began holding services in September, Zach Kincaid, the church’s spokesperson, said. Now they are looking to finish certain cosmetic projects around the church, including landscaping and interior design.

The Anglican Church built a new space because they lost their original sanctuary (115 E. Fairfax Street) in a legal battle when they split from the Episcopal Church due to political and religious differences. The Episcopal Church declined to comment.

The new church cost around $16 million, which came from contributions by the congregation and parishioners, Kincaid said.

Before deciding on the Falls Church spot along Route 50, they considered following other parishes that built churches in Loudoun County, where real estate is less expensive, Kincaid.

“The glue that stuck us to something around here was to be part of this neighborhood still,” he said. “It was a fleeting thought.”

In total, the new space consists of 16,000 square feet of space divided between two stories, Kincaid said. About 6,000 square feet will be used for a gathering space for children and family, while the remainder will be worship space.

The church has around 900 chairs but typically seats around 1,200 worshipers each Sunday, Kincaid said.

“Lots of people tend to turn their attention to church as Advent comes up,” he said, explaining that membership and attendance tend to increase around Christmas time.

To engage with the surrounding community, the church invited surrounding neighborhoods to stop by for open houses.

The church shares an office space next door with other professions, such as doctors.

Renovations should be completed soon, Kincaid said, but they currently do not have an exact date. The church is finishing up the permit process with Fairfax County.