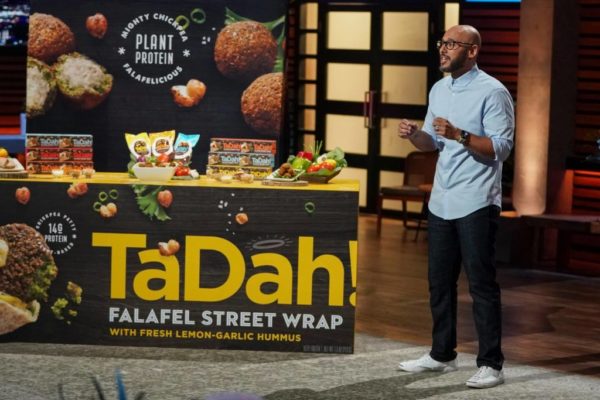 A Tysons-based entrepreneur struck a big deal with the founder of KIND Snacks on reality television last week.

Things were looking down financially for TahDah Foods before CEO John Sorial decided to appear on the season 11 premiere of “Shark Tank” on ABC — ultimately making a deal with Daniel Lubetzky, the CEO of KIND Snacks.

TahDah Foods began as a frozen falafel wrap line, which offers customers several flavor varieties. The products are naturally gluten-free since they are made with chickpeas. The company also donates 25% of profits to charity, aiming to help end hunger and inspire social change, according to the website.

The food has been in stores for some time — including Wegman’s, Whole Foods Market, Harris Teeter and MOM’s Organic Market. Recently, the company ran into a supply problem and was losing money because the product wasn’t being produced quickly enough.

Four people were doing the job of 12, he told the sharks. “I would stay up with the staff and was shoveling chickpeas myself.”

Sorial is the son of Egyptian parents, who fled to the U.S. because of political persecution. After working in chemical engineering, he decided to transition to a career he felt was more fulfilling.

“I took authentic foods from the motherland and gave them a fresh new taste and look,” he said, adding that the idea of helping his family and people around the world motivates him to succeed.

“Your story resonates a lot with me,” Lubetzky said, adding that he thought Sorial’s original goal wouldn’t be enough to get him out of the financial hole.