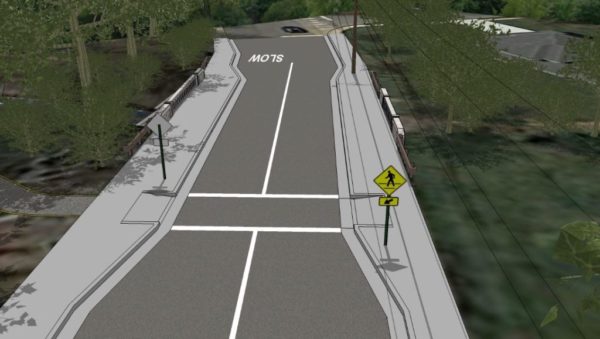 The City of Falls Church is planning to replace Oak Street Bridge after it was damaged from flooding in July.

Located at South Oak Street, the bridge runs over Tripps Run. The proposed plans would replace the bridge — which was flagged as being in poor condition before the flooding — with a new steel span bridge that will connect people to Howard E. Herman Stream Valley Park.

“Although the surface of this bridge was damaged during the July 8 floods, this long-term project was already pending,” according to a press release from the city.

More from the city:

In 2012, Dewberry inspectors found the bridge to be in poor condition with a bridge rating of four out of 10. There is severe corrosion in the steel beam webs. Timber blocking was installed at locations where steel beam webs were severely corroded. Concrete deck has spalling and numerous hairline cracks with some exposed rebar.

The bridge has been on a yearly inspection cycle since 2012. The rating has not changed and there have been no major changes from the 2012 condition. Each annual inspection recommends replacing or repairing the steel beams and concrete deck immediately.

The city’s Planning Commission is scheduled to discuss the conceptual design for the replacement bridge with the consultants and design team from Kimley-Horn on Monday, Oct. 21, at 7:30 p.m.

City officials will discuss the project timeline at the meeting.

The city will allow public input on the project until Nov. 6.

END_OF_DOCUMENT_TOKEN_TO_BE_REPLACED

More Stories
Taco Bamba in Vienna, Falls Church Fundraising for Hurricane Dorian SurvivorsOp-Ed: What Local Prosecutors Can Do About The Immigration Crisis