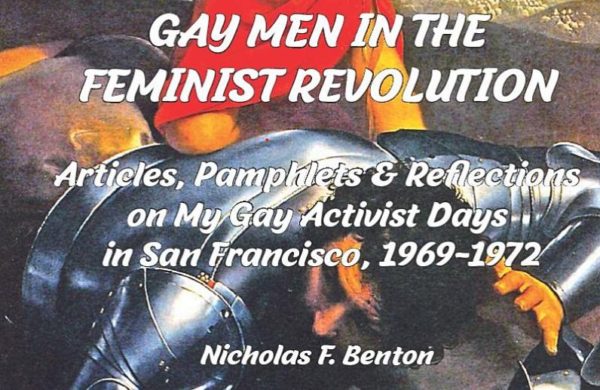 The editor in chief of the Falls Church News-Press released a book earlier this month exploring a gay perspective on feminism.

Author Nick Benton released his book “Gay Men in the Feminist Revolution: Articles, Pamphlets and Reflections on My Gay Activist Days in San Francisco, 1969-1972” on Sept. 17 through Amazon. Benton told Tysons Reporter that he hopes it will educate people on the power of feminism in politics.

Though this isn’t his first book discussing perspectives from the LGBTQ+ community, Benton released his latest book for the 50th anniversary of the Stonewall Riots in 1969.

“This is my two cents in terms of what happened 50 years ago,” Benton said.

Benton began his career in the San Francisco Bay Area writing for different gay media outlets and spent several years as an LGBTQ activist before moving to D.C. to become a White House correspondent.

Later in his career, he decided to set up shop and start a newspaper in Falls Church to cover a local news gap.

Benton told Tysons Reporter that he thinks feminism will be important for switching up the political culture in 2020 and hopes his readers will walk away with a more comprehensive background through historical documentation.

Readers might be surprised about “the depth of the commitment to feminism by gay men,” he said, adding that people often think about the topic as “one-dimensional,” but in reality, the gay community is very thoughtful and supportive when it comes to feminism.

When asked how people in the City of Falls Church will react to the book, he referenced the former FCNP column “Anything But Straight” saying that LBGTQ perspectives were well received by readers and he expects the same for his book.

During the writing process, Benton said he struggled to find the time and energy to complete the book, adding that much of it is based on extensive research he did himself.

The “Stonewall 50” event, hosted at the Falls Church Episcopal Church back in June, inspired him to finally finish the book. The event attracted several dominant figures in the larger community who spoke about the importance of LGBTQ advocacy, Falls Church News-Press reported.

Going forward, he hopes new generations will learn from and engage with his book.