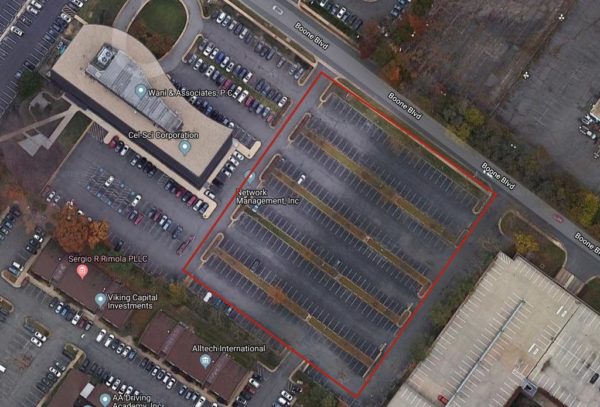 Tysons may soon get a new athletic field in connection to The Mile development.

The developers behind the previously approved The Mile project now want to create a youth-sized athletic facility in the Old Courthouse neighborhood of Tysons to fulfill one of the development’s proffers.

The developers want to create the field on a site along Boone Blvd that currently has an 8-story-tall office building and surface parking lot. The site was previously approved for an extended stay hotel that was never constructed.

The developers propose to convert the parking lot into a field measuring 180 feet by 330 feet. The field would be surrounded by a black chain link fence between 10-24 feet high to prevent balls from escaping and include portable toilets, bleachers and bike racks.

The parking lot would get reconfigured to serve both the athletic field and office building, which houses Cel-Sci Corporation and Liberty Tax Service. While the developers would own the field, Fairfax County Park Authority would operate and maintain the park.

“So we’re able to take advantage of that which I think is a creative way to find land in Tysons Corner that is much needed for athletic fields,” Elizabeth Baker, a senior land use planner for Walsh, Colucci, Lubeley & Walsh, told the Fairfax County Planning Commission last night (Wednesday). 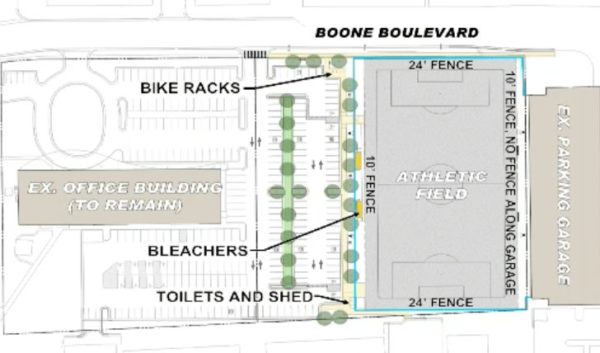 Baker said that while the athletic field is “youth-sized” because it is smaller than a full-size athletic field, she expects adults will use it as well.

“I think it’s a field that is going to be well used,” Baker said. “Obviously it’s an older building. It was built 40 years ago so it a site that’s been around for awhile, but is a large parking lot with excess parking in it.”

At-Large Commissioner Mary Cortina asked if restroom buildings could replace the portable toilets at the site.

“The Park Authority model of providing those porta-potties I think is really a holdover — even though we continue to do it — from another era when we were more suburban and there were no services in some of those park areas,” Cortina said. “This is right in the heart of Tysons.”

Baker said that having portable toilets at the site is no different than Ken Lawrence Park or Quantum Field in Tysons, “so it is meeting the standards for the Park Authority and that’s what we’ve provided here.” 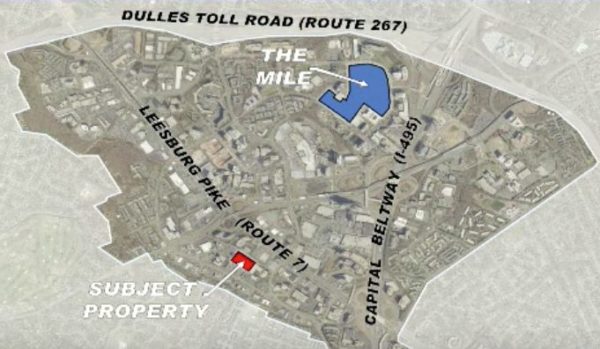 Still, Cortina made a plea to the Park Authority to do away with portable toilets in the future.

“As we’re doing urban design we can’t forget the toileting needs,” Cortina said. “To continue to have these porta-potties throughout this urban development, it just seems to be incongruous with the rest of the streetscaping et cetera.”

A representative from the Park Authority said that restroom buildings are considered for fields and parks connected to larger developments and that portable toilets are appropriate for standalone parks.

Baker reassured Cortina that the portable toilets are in a corner of the site so that they won’t be visible to people walking or driving along Boone Blvd.

The Planning Commission voted to approve the proposal, which now heads to the Board of Supervisors.

“This new synthetic turf field will be a welcome addition to the Park Authority’s inventory of playing fields in Tysons,” Phillip Niedzielski-Eichner, the commissioner for the Providence District, said.