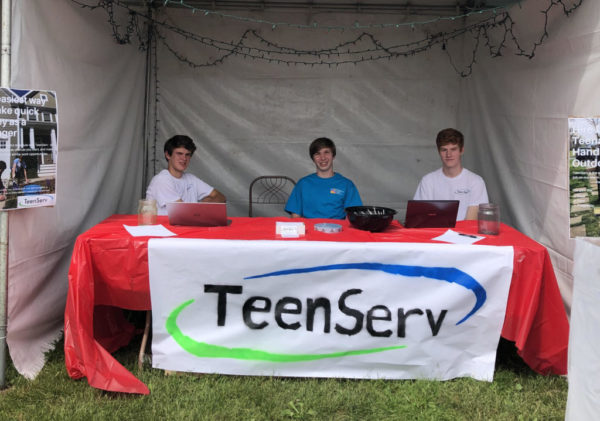 Their new company, TeenServ, aims to solve teenage unemployment with a platform that matches students and community members who need short-term assistance with various tasks. Website users can pick-up shifts wherever and whenever they want, making it convenient for hectic schedules.

Around a year ago, Jack Lannin, Quin Frew and another McLean teen were walking home together from the local pool where they worked as lifeguards, upset that they received a significant pay cut when they came up with the idea for TeenServ.

Lannin told Tysons Reporter that pay change “almost cut their salary in half,” and they wanted to find another job but there were few options.

“Aside from getting a real job, reffing sports or yard work, there isn’t really a good way to make money,” Lannin said, adding that even becoming a referee requires a significant startup cost for teens — around $70 — to pay for training and a uniform.

They started out by going door-to-door and asking community members if they would pay teens fair wages for short-term yardwork. Soon enough, they began gathering opportunities.

“For teens, it’s really intimidating going door-to-door,” Lannin said. “But for us, it wasn’t a big deal.”

With help from an entrepreneurship class at McLean High School and feedback from peers, the students were able to turn their idea into a reality. Currently, they said they are learning as they go, thanks to guidance from their class and feedback from customers.

So far, the website has employed more than 200 teens, according to Lannin.

The third founder, whom Tysons Reporter wasn’t able to receive parental permission to publish their name, said one of his friends has made more than $1,500 so far by taking on random jobs and managed to build a rapport with homeowners who request him for all their upcoming tasks.

TeenServ pays students up to $18 per hour — well above Virginia’s minimum wage of $7.25.

The boys say the platform is mutually beneficial for community members and teens. The community members enjoy working with teens because it gives them an opportunity to interact with someone they otherwise wouldn’t, and teens feel like they are giving back to the community, they said.

If the customers are unsatisfied with the work, the three founders will come back to finish the job free of charge. The founders said they only had to take a customer up on this once or twice so far.

“For the future, we really want to start with McLean and expand as large as possible thought the area,” the third founder said.