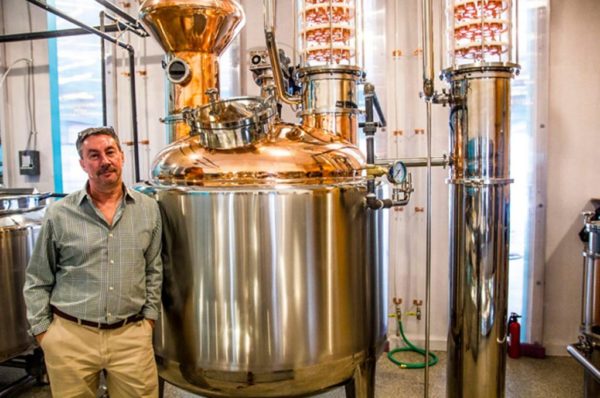 Distilleries across the county are fighting a looming tax raise they say threatens their existence — and one Falls Church distillery is joining the fray.

Michael Paluzzi owns Falls Church Distillers and is currently petitioning Congressmembers to pass a bill that would freeze current tax rates in place before they expire at the end of the year.

If the tax rates expire, distilleries across the nation could see a spike in liquor production costs, possibly causing some local distilleries to nix plans for expansion or even close.

In an attempt to prevent that, Paluzzi gathered with more than 160 other distillery owners for a conference in D.C. last month to discuss dilemmas in the industry, set up congressional visits with senators and find a way to stop the federal tax increase.

The conference was held in conjunction with the American Craft Spirits Association, a non-profit organization consisting of distillery owners and stakeholders, along with the Distilled Spirits Council.

The association is one of the interest groups spearheading legislation to keep the current Federal Excise Tax.

It may be too late to get the law passed as an individual piece of legislation before the deadline, the association’s CEO Margie Lehrman told Tysons Reporter.

To work around this problem, the group hopes to instead piggy-back it onto other legislation set to be voted on, as a rider bill. She said because of support from over 272 cosponsors, the group is fairly confident this idea will work.

“It is not a Republican bill. It’s not a Democrat bill. The entire alcohol industry is united,” Lehrman said.

Lehrman said she is fairly optimistic about the legislation passing as a “tax vehicle,” since the legislation has traction from over 70 senators around the country. However, Paluzzi worries that legislators will misunderstand the impact of the taxes on small companies.

Paluzzi said that legislators don’t want to be seen giving tax breaks to large distillery companies like Jack Daniels. “This [tax break] means nothing to them and everything to us,” Paluzzi said.

With the tax breaks from the federal government, Paluzzi was able to reinvest in his own business by hiring two new team members. “Any tax relief I was given was more than made up for in the local economy.”

Paluzzi said that it takes three to five years for distilleries to start making even a small profit because of high startup costs.

“This tax relief, for many, was a type of lifeline,”  Lehrman said.

Both Lehrman and Paluzzi spoke to the cultural and historical value of distilleries.

Rooted in their love for liquor, they are also proud of the history behind the distillery. Not only is it the only privately owned distillery in Fairfax County, but it was also the first to open in the area since prohibition ended in 1933.

“If we wanna think about a product that’s made in America, there is nothing more demonstrative of innovation,” Lehrman said.

Currently, the bill is in the House Committee on Ways and Means.

Though no-one can say for certainty what the outcome will be, Paluzzi said he and other distillers will continue to network with other distillers and politicians while spreading awareness for this issue.

Paluzzi said that liquor has a “historical disadvantage” when it comes to the federal tax rate, and he wants to see “permanence and parity” with that of wine and beer.

“Virginia is the birthplace of distilleries,” Paluzzi said.