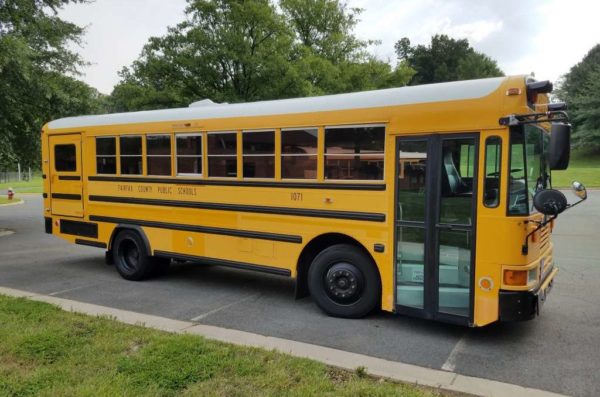 Fairfax County Public Schools (FCPS) once again faces a transportation dilemma as it looks ahead to the upcoming school year.

The county recently made an all-call for new bus drivers. The district is short-staffed by roughly 100 drivers — primarily in the McLean area, FCPS Director of Transportation Francine Furby said.

There are two hiring events coming up on Tuesday, July 31, at Cedar Lane School (101 Cedar Lane) in Vienna and the Thursday, Aug. 8, at Edison High School (5801 Franconia Road) in Alexandria. Both events will run from 10 a.m.-2 p.m.

This isn’t the first time FCPS faced a bus driver shortage. According to WAMU, there was another county shorage in August of 2017, when drivers were paid $18.82.

Furby said that the issue is ongoing and exacerbated at a national level, not just in Fairfax County. “I think it’s because of the economy now,” she said, explaining that bus drivers tend to take on other positions within the school district due to promotions.

Now, the county will offer drivers a raise to $19.20 per hour — $0.19 cents higher per hour than the salary for the previous school year.

Furby said that FCPS transportation office workers would be pulled out of their current positions answering phone calls from parents and instead be asked to drive students.

While some of the office workers are all set to start in their new roles, Furby said that the other office workers will receive the training and resources required for FCPS bus drivers.

She also said that there is a recruitment bonus of $1,000 for existing employees who refer a friend for a bus driver position.”We do know recruiting people by word of mouth is very effective.”

Qualified candidates need to be able to pass a physical and a drug test, clear a background check, have a safe driving record, take a 5-week course and obtain a commercial driving license. Drivers will be assigned to where they are most needed in the county, according to Furby.

“It can cause students to get into school late and get home late,” she said.