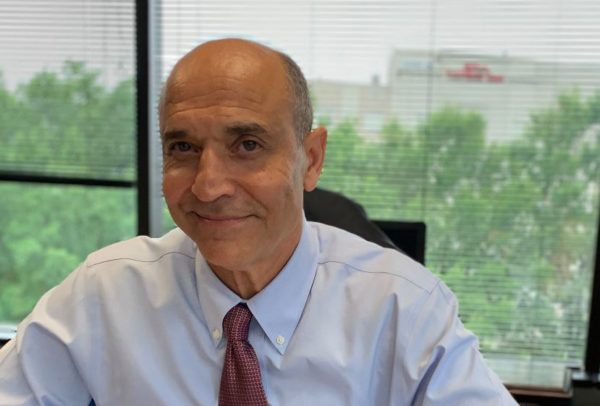 Currently the head of Arlington Economic Development, Hoskins recently wooed Amazon and its HQ2 to Arlington County. Come August, he will become FCEDA’s new president and CEO — one year after its now-retired and longtime leader, Gerry Gordon, announced his plans to leave.

Tysons Reporter talked to Hoskins about how he plans to head up one of the largest economic development agencies in the country.

Hoskins said he entered the process for the FCEDA role back in May during the agency’s second hiring search for the position.

Back in December, he told ARLnow that he planned to work for Arlington County until the office vacancy rate dropped from its then-18 percent rate to 10 or 12 percent.

“If you look at my history, I pretty much do what I need to do and move on,” he said. In the case of both his former economic development role in D.C. and his Arlington County job, Hoskins, who describes himself as a person who likes to finish projects, said that he leaves once he’s accomplished the specific challenges of a job.

“What I look for in a career change is a challenge,” he said. “This is a different kind of challenge. Just the size of the market is pretty amazing.”

Hoskins said he is looking forward to encouraging companies in Fairfax County to recruit and train more top workers with a talent-focused strategy.

“We already have a lot of talent residing [in Fairfax County],” he said. “We need to keep the people we have.” A part of that will include offering more opportunities to retrain employees with skills like cybersecurity coding, he added.

He also said he would like to see FCEDA get more closely involved with the county’s Department of Housing and Community Development, in addition to continuing work with the Planning Commission, Virginia Department of Transportation and other county agencies to set priorities.

Additionally, Hoskins said that the county could use more work on placemaking.

“The size of Fairfax County makes it difficult to create places — concentrated nodes of activity,” he said, which could include creating more urban villages around the Silver Line stations and making “a nexus between residential and commercial nodes.”

Another area Hoskins wants to work on is making Fairfax County more attractive to millennials.

Some ideas he has: creating places where people want to work and eat outside, offering more housing choices, making “interesting environments” and strengthening mass transportation.

Hoskins was quick to note that many of the challenges he mentioned are not unique to the county, which he praised for its global reputation and competition with places like London and Paris.

“Fairfax is amazing right now,” he said, lauding the county’s quality of life, including its public schools and parks. “Fairfax has it all. What we’re trying to do it to move it to the next level.”

While Fairfax County lost its bid for Amazon, Hoskins said that the tech giant will impact Northern Virginia, from adding a plethora of new job opportunities to a “back and forth between employees and employers” with Amazon and local companies.

Hoskins also mentioned a recent report by the Northern Virginia Association of Realtors and the George Mason University Center for Regional Analysis, which estimated that roughly 33 percent of Amazon’s workforce would live in Fairfax County, while 16.4 percent would live in Arlington.

“It’s a higher percentage than [Amazon employees who] will live and work in Arlington,” Hoskins said.

On a larger scale, Hoskins said Amazon will transform Northern Virginia into a more innovative environment that will increase the private sector.

“[Amazon will bring an] innovation focus to the region where companies begin thinking differently about how they work,” he said.

Hoskins starts his new role on Aug. 5. Until then, he said he will help with the leadership transition at his current job before having two to three days off.

“Building an economy is more like solving a very complex puzzle,” he said.