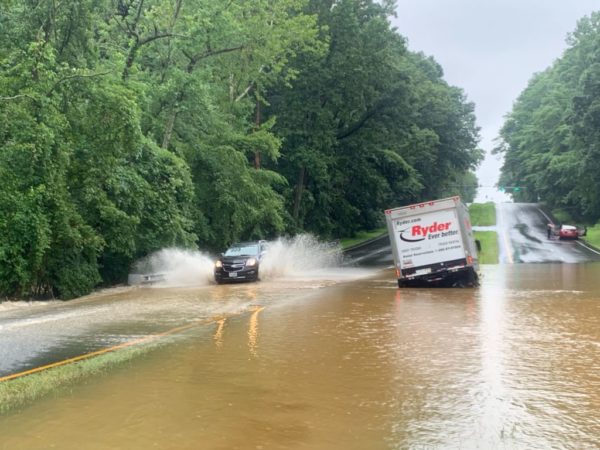 In a board matter approved at the Board of Supervisors meeting today (Tuesday), Dranesville District Supervisor John Foust said, “The McLean-Falls Church area was particularly hard hit. Today, more than a week later, there are roads in the county that remain closed with no estimated date for reopening.”

The flooding caused extensive disruption to the area from water rescues to road closures last week.

The region experienced about one month’s worth of rain, making it the heaviest one-hour total rainfall since at least 1936, according to the Washington Post. The City of Falls Church and Arlington County both declared a state of emergency just days after the storm.

More from a copy of the board matter that Tysons Reporter received:

Fortunately, despite the intensity of the storm, no one was severely injured or worse. The Office of Emergency Management and the county’s public safety and public works staffs were great! I commend them for reacting promptly and very professionally to emergencies that occurred throughout the county.

Since the storm, my office has received dozens of emails and phone calls from residents who experienced devastating damage to their property. Many residents had several feet of water and mud in their basements. Others experienced even worse damage. Some residents have estimated the cost to repair the damage will be as high as six figures.

The Office of Emergency Management has asked residents and businesses to file damage reports so that the county can evaluate whether we will pursue federal disaster aid… [Residents] are anxiously inquiring whether Fairfax County will do the same. They also need to know what federal aid might be available to them if a federal disaster is declared.

Residents are also learning that their property insurance may not cover their damages. Some residents believe that a lack of adequate infrastructure to convey some or all the stormwater contributed to the damage they suffered. Some have inquired about filing potential claims against the county and/or the Virginia Department of Transportation.

Now, County Executive Bryan Hill will need to let the board know about the status and timing for determining whether or not the county will receive federal disaster aid after the county retroactively declared a local emergency.

“Many asked why we didn’t do a declaration the day after the storm like Arlington,” Hill said.

Hill said that he had several conversations with Foust about the process and that meetings are scheduled with the county’s stormwater management crew. “We will probably need to change how we do our engineering going forward,” Hill said.

The county’s Emergency Management Coordinator Seamus Mooney is set to update the county in the last week of July, Hill said.

Additionally, Foust’s board matter directed the county to create an informational flyer or brochure about how residents can submit damage claims to the county and the Virginia Department of Transportation, along with a list of county services and resources that could assist residents experiencing storm damage.

Chairman Sharon Bulova said that it’s also important to push information on social media on what people should report and why.

“We will likely have additional storm and water events in the future,” Bulova said, adding, “We’ve gotten really good at snow and not so much with water.”