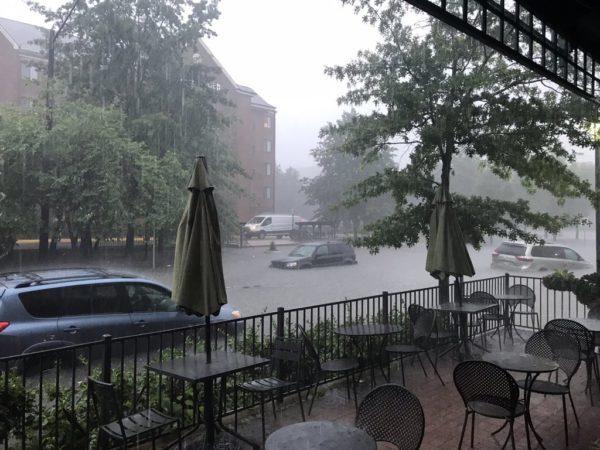 “Most of the complainants who called this week seemed to think the issues were definitely caused by the heavy rains,” Hanna Kras, a Land Development Services staffer, wrote in an email obtained by Tysons Reporter.

Kras noted that inspectors’ resolutions to complaints will “give a better picture about whether or not these issues were driven by the flooding.”

“After a rain event like this, our inspectors respond to emails and phone calls about run-off and debris from construction sites that are impacting neighboring properties,” Anne Cissel, the spokeswoman for Land Development Services, told Tysons Reporter.

Cissel added that inspectors are “still catching up on filing their reports into the system.”

In a complaint last Wednesday (July 10), a woman reported that new construction in the 6500 block of Smoot Drive switched the grade from facing toward the street to facing toward her mom’s house, resulting in runoff.

Inspectors told the builder to fix a silt fence that “was breached due to Monday’s flood flush.” The inspectors were scheduled to meet with the complainant this morning.

In another complaint on Friday, July 12, someone reported worsening gravel and debris issues at 6500 Tucker Avenue, adding that “with the recent rain downpours, it has gotten even worse, spreading all over the roads making them hazardous in our area.”

These three complaints are still marked as “open” or “in progress” as of this afternoon.

One complaint the county closed was from last Wednesday (July 10) about a blocked drain that flooded a street and nearby yard. The inspectors found that the contractor at 1629 Wrightson Drive “had inlet protection at the storm structure… [The contractor] will remove inlet protection when expecting heavy rain.”

When asked if crews had trouble getting to the sites because of the storm damage, Cissel responded, “Kirby Road is closed and Benjamin [Street] was also impacted.”