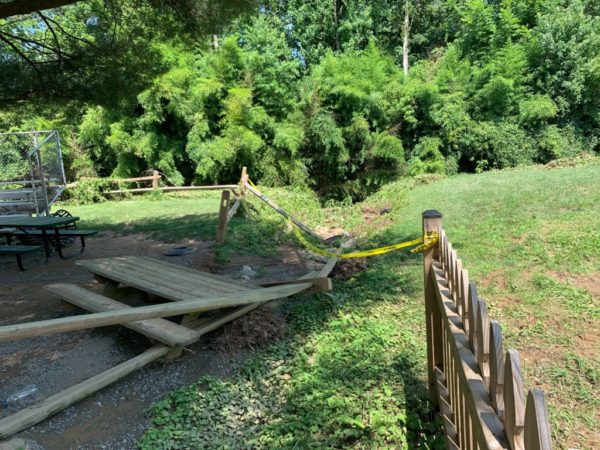 Updated at 9 a.m. — The Fairfax County Park Authority said this morning (July 10) that the west parking lot at Scott’s Run and bridge at Lewinsville Park are still closed.

Around the Tysons area, work is underway to clean up and repair roads, parks and even a high school after severe flash flooding yesterday.

“Nearly 5 inches of rain fell on Fairfax County Monday morning — nearly a month’s worth of rain in just a few hours, overwhelming numerous parts of our public infrastructure,” according to Fairfax County.

McLean High School had two hallways flooded along with the athletic locker rooms and coaches’ offices, Ellen Reilly, the principal of the high school, told Tysons Reporter, adding that Fairfax County Public Schools assessed the school today (July 9) to make sure that all of the areas were safe.

“Custodial staff worked throughout the day pumping out the water from the locker rooms and the carpets will be shampooed once everything dries out,” Reilly said.

The staff received a shout out on the high school’s Twitter:

Thanks to our custodial staff for cleaning up after the flooding that occurred throughout our school yesterday. They are amazing! pic.twitter.com/CAQ4BwDPdy

Kirby Road will continue to be closed in McLean for several weeks as crews work to repair extensive damage.

The Fairfax County Park Authority said this morning that several parks in the Tysons area are closed as park teams assess the damage, including the west parking lot at Scott’s Run and bridge at Lewinsville Park.

Scotts Run Nature Preserve receives much of the runoff from Tysons rains. Even the slightest bit of rain can turn the serene stream into a raging river. Always use caution. @FairfaxCountyPD @fairfaxcounty @ffxfirerescue https://t.co/m9O7cBWf5Q

END_OF_DOCUMENT_TOKEN_TO_BE_REPLACED

More Stories
Kirby Road in McLean to be Closed for Weeks Due to Storm DamageAfter Nine Years, Mad Fox Brewing Company Set to Close Its Doors