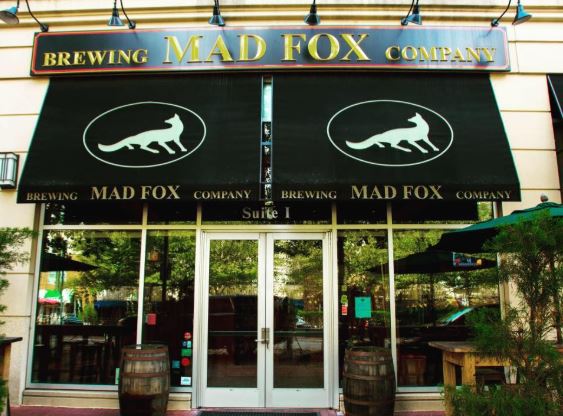 Yesterday (Tuesday), the brewpub’s Facebook page had the following message:

It is with great sadness and a heavy heart that I inform you of the closure of Mad Fox Brewing Company. Our last day of business will be Sunday, July 21st.

The decision to close has been an extremely difficult one to make. We have witnessed restaurant competition in the 2.2 square mile Falls Church City become fierce since our opening in 2010 with multiple businesses opening in the last year alone. As much as we tried to compete, there are an overwhelming number of choices for the local population. Sales have been on a slow decline over the last several years and, unfortunately, staying open is no longer sustainable.

On the brewing side of our business we continue to see more breweries opening in Virginia with two new Taprooms setting up shop within a mile of Mad Fox in the last year. When we opened in 2010, there were 40 breweries in Virginia. Now there are close to 250. The Brewpub business model is a tough one to maintain compared to a Brewery Taproom with little overhead, lower rents and outsourced food trucks. Our draw from the surrounding areas has dwindled in what has become an extremely competitive craft beer market, which has resulted in this final decision.

We attempted to work with our Bank and our Landlord for more favorable terms and while both were willing, we ultimately could not come to agreement that would allow Mad Fox to be break even or better.

We plan a closure date of Sunday, July 21st; however, we plan to continue with our 9 year Anniversary Party on Saturday, 13 July to honor you, our investors, our staff and the Falls Church Community. Words cannot express how proud I am of the Mad Fox legacy and the opportunity to be a member of such a wonderful community, if even for a short while. We opened the first brewpub in the City of Falls Church and have won numerous medals at the Great American Beer Festival as well as the Virginia Beer Cup. We have celebrated christenings, birthdays, weddings, retirements and many holiday gatherings. You, our guests, along with our spectacular Mad Fox team have enabled us to build tremendous notoriety over 9 years in business. I thank you for allowing Mad Fox to be a part of your lives. Thank you for your years of support and I hope to see you at the Pub in the coming weeks.

With more than 350 comments on the post as of 8 a.m. today (Wednesday), many people grieved the closure announcement, saying they would miss a favorite place to frequent and the food and beer — especially the Orange Whip IPA.

“I have so many fond memories and so enjoyed the beer, food & ambiance. It is a sad day indeed. Thank you Bill,” one person wrote.

“So very sad to read this post… we have been fans of Mad Fox since 2015 and have brought family and friends over the years,” another commenter said. “We loved the food (especially the meatloaf and the frickles!), the beer (my favorite is Orange Whip) and all the wonderful events and celebrations.”

“My girlfriend and I had our first date at Mad Fox in 2011. We always enjoyed stopping in for the good food and great beer or the special events,” wrote another person.

Several brewery founders commented under the post thanking Madden for his support for their breweries.

Stein Sellier, the president and president of Beltway Brewing Company in Sterling, wrote, “I am grateful for all you did to help me start Beltway and all the advice you’ve shared over the years — I know I am not alone.”

Sarah Meyers, one of the founders of BadWolf Brewing Company, also thanked Madden for supporting BadWolf in the early days. “You guys brew excellent beer and we support you and Jeremy [Meyers] and I are here if you need anything or someone to talk to… we love you guys,” Meyers wrote.

The brewpub plans to celebrate its anniversary on Saturday (July 13), from 11 a.m.-close with rare beers on tap, live music and a glass giveaway at 444 W. Broad Street, Suite I.