The Fairfax County Board of Supervisors mostly expressed support for implementing body worn cameras for the county’s police department following presentations about the results from a six-month-long pilot program.

Chief of Police Edwin Roessler Jr., Richard Bennett from American University and Deputy County Executive David Rohrer presented the results of the study to the county board during yesterday’s Public Safety Committee meeting.

The results of the study arrived almost a year after the pilot program, which was rolled out in the Mason, Mount Vernon and Reston district stations from March-September 2018, ended.

Funded by the Koch Foundation and American University, the study randomly assigned half of the police officers in the three districts to body worn cameras and collected data from surveys, focus groups and ridealongs from both officers with and without the cameras.

While officers who wore the cameras during the pilot slightly increased their level of interest in the cameras by the end of the pilot, Bennett said that most officers said in focus groups and surveys that the cameras would not change how they work or how civilians’ react.

However, Bennett noted that people had slightly fewer complaints against the officers who wore the cameras, than ones who did not.

During the presentations, the police chief made a pitch for the county to implement the program. “I’m confident that [the county] should approve the program,” Roessler told the committee. “The IT infrastructure can be built up at the other facilities.”

The nearly $30 million proposed program would issue 1,210 body-worn cameras that would be phased in over three years with a five-year contract for equipment, licensing and storage. Body worn cameras would come to the McLean District during the second year of the program, according to the timeframe in the presentation.

About $10 million would be needed for contract costs, while $20 million would go toward staffing, with new positions needed at the police department, Office of the Commonwealth’s Attorney and the Department of Information Technology.

“[Body worn cameras] give you some facts, but it’s pretty cost-prohibitive at this stage, in my opinion,” Herrity said, adding that he’d rather see more money go toward recruiting and training top talent for the police department. “I think that’s where the money ought to go, instead of cameras.”

In response to cost concerns and using the money elsewhere, Lee District Supervisor Jeff McKay said that it is an investment in the police department that will help boost public confidence, while keeping police safe — “It’s not this versus that.” 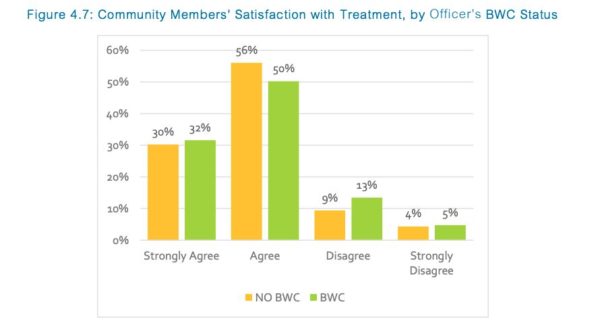 In response to a question from Providence District Supervisor Linda Smyth about cross-referencing between video footage from the cameras and complaints, Rhonda VanLowe, the former chair of the Police Civilian Review Panel, said that the footage helped them determine how the police officer acted regarding a racial profiling complaint.

“In contrast, we’re grappling now with a complaint where we don’t have any body worn footage, and we have no way assessing… [The pilot] has had a tremendous impact on the work we have done,” VanLowe said.

While the main agencies that would be impacted by the program are “generally supportive,” Rohrer said that there are some lingering concerns such as how staff would review the significant amount of video generated from the program county-wide.

Ultimately, Rohrer “You can’t put a price on trust,” he said.

Dranesville District Supervisor John Foust agreed, arguing that they help with perception issues between police and civilians — especially for people of color.

Hunter Mill District Supervisor Catherine Hudgins echoed a similar sentiment, saying, “It is unfortunate that people of color feel that they are going to be treated less than someone else. They didn’t create the challenge. That challenge was created by our society, and we need to correct that.”

Supervisors Daniel Storck of the Mount Vernon District and Kathy Smith of the Sully District also expressed support. Supporters also pointed to the national coverage around concerns with police, saying that, while Fairfax County has a good reputation for its police department, the county does not exist in a vacuum.

Meanwhile, Mason District Supervisor and the board’s Vice Chairman Penelope Gross said she’s “not quite there yet” in support of the program.

The supervisors discussed getting an action item regarding the proposed program, which got a blessing from the head of the board, ready for an upcoming board meeting in a few months.

“I think we should move forward,” Chairman Sharon Bulova said, adding that it’s important for the county to stay up to date with technological advances.

Bulova also stressed that it is common now for the public to film law enforcement, but it’s difficult to know if that footage has been doctored or tells the whole story about the incident if the police do not have their own footage to make comparisons.