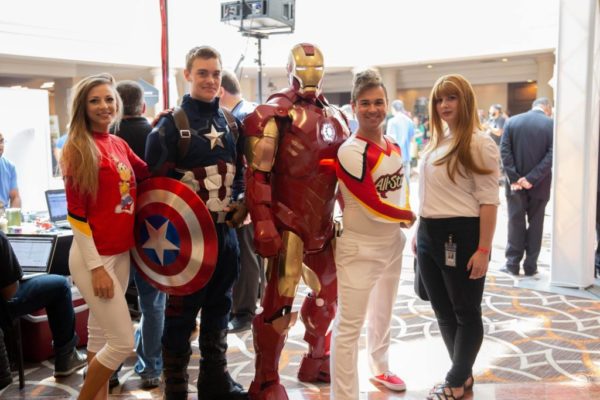 Updated 4 p.m. — All Star Comic Con — a comic convention held at the Sheraton Tysons Hotel (8661 Leesburg Pike) — is coming back this weekend for its second year.

It’s not exactly Hall H of San Diego Comic-Con, but there are some big names coming to town, and like last year, plenty of other activities are scheduled.

The convention is set for June 8 and 9. Tickets are $35 for a two-day pass or $99 for a pass with “front of the line privileges” and admission to an evening gala.

While many conventions today have swung more toward general pop culture, co-founder Michael McNutt told Tysons Reporter All-Star very much goes back to the roots of comic conventions with a focus on comic books. Two of the biggest names at the convention this year are Tom King, a D.C. area local who won the Eisner Award last year for best writer, and Gail Simone, a writer with a long body of work at Marvel and DC comics.

“Last year, we tried to hit all points,” McNutt said. “You stretch yourself out and end up being a B-student because you spread out. We wanted to focus on comic books this year.”

While there was a smattering of gaming aspects at the convention last year, McNutt said he’s worked to double down on that this year and implement more gaming media into the convention.

If last year was any indication, cosplay will play a big part in this year’s convention, especially with Saturday night’s cosplay competition.

“We want people walking out of there embracing new fandoms,” McNutt said. “It’s all brand new to me… Cosplay was one thing in the last year I’ve gotten more and more into. I made my son an Iron Man helmet and arc reactor and made my other child a Kid Flash helmet.”

McNutt worked professionally in event directing for other companies and organizations but eventually wanted to host his own event. The event is smaller than some of the other comic conventions across the country, but McNutt said the hotel setting gives it a more intimate and personal touch.

For McNutt, his ultimate goal is for the convention to become more of a social group than just an annual event. The group also hosts a book club featuring local authors and meet-ups at breweries and other regional conventions.

“A lot of people are going to sit there and talk about the celebs and fun things, but our thing really is the community created through this,” McNutt said. “I’ve received emails about this and people have pulled us to the side — people who tell me they haven’t had the best of luck making friends… People who were like ‘I can’t find my place in this world’ now have a place.”

Photo via All Star Comic Con/Facebook