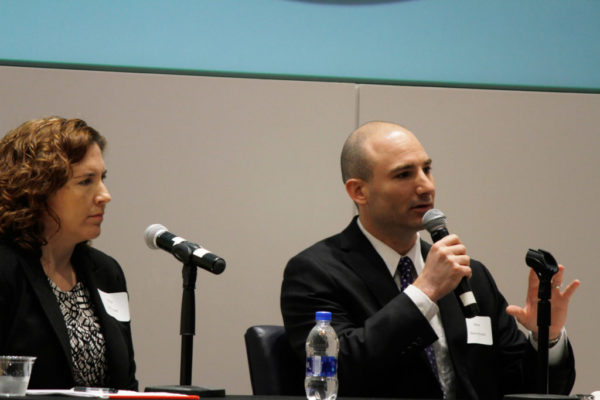 Different takes on the role of prosecutors in the justice system took center stage in a rare fight for the Democratic endorsement for the commonwealth’s attorney position in Fairfax last week.

While the candidates in the Board of Supervisors chair race that followed were in agreement on most issues, Deputy Commonwealth’s Attorney Katherine Stott — standing in for incumbent Raymond Morrogh who was out with bronchitis — and challenger Steve Descano sniped back and forth constantly last Friday (May 24) at Valo Park (7950 Jones Park Drive).

Descano’s campaign is part of a broader push across Virginia from left-leaning candidates arguing prosecutors should take an active role in things like functionally decriminalizing marijuana and eliminating cash bonds.

“That’s the main driver of this campaign,” Descano said. “Cash bonds turn this into a two-tier system of justice. Cash bail doesn’t do anything but punish people for being poor. What happens when we hold people in jail because they can’t pay means they could lose their jobs or lose their house. It drives up their recidivism rate. We’re paying $225 a day to build more crime down the road. I will instruct my prosecutors, if there’s no risk of safety or flight, get rid of cash bonds.”

But Stott said Descano’s ambitions are driven by naivety.

“[Descano] shows his inexperience with the Virginia state system,” Stott said. “There are legislative code systems that define how cash bail is used and a judicial element. In the Office of the Commonwealth’s Attorney, we do not ask for a cash bond. Defendant appears before a magistrate, which sets bond. If they are held overnight, they see a judge the next day. We don’t ask for cash bail.”

The fight is similar to a race in neighboring Arlington and an ongoing battle between the Norfolk commonwealth’s attorney and local judges.

The two also clashed over capital punishment and marijuana enforcement — mainly over whether the commonwealth’s attorney’s office should decide an overarching policy or tackle the cases individually. Descano said he would never pursue the death penalty, while Stott said the cases have to be reviewed on an individual basis.

For small amounts of marijuana possession where there is no intention to distribute, Descano said he would move the court to dismiss the cases. Stott said Morrogh supports decriminalization of marijuana but argued it’s not up to the commonwealth’s attorney to decide that.

“Descano’s response is another example of how he crosses out of his lane,” Stott said. “[He says] that he’s a member of the executive branch and doesn’t want to enforce the law from the legislative branch. When you become a commonwealth’s attorney, you take an oath to uphold the laws of the Commonwealth, and that’s a serious oath.”

The candidates also faced off on statewide issues involving the application of justice, issues that put Descano on the side of defending the democratic establishment.

Gov. Ralph Northam had vetoed a measure that would charge drug dealers with second-degree murder for opioid deaths. Descano argued the measure targeted fanciful drug kingpins when most opioids were obtained from friends who wouldn’t come forward to get help with their addiction if they could be on the hook for murder. But Stott argued it was naive to dismiss that there were people and institutions who profited from these deaths.

Morrogh had expressed opposition to former Gov. Terry McAuliffe’s blanket restoration of rights to felons, and Stott argued the issue had been that restoring voting rights had also restored gun rights, which enabled convicted MS-13 members to petition the court to get gun rights back.

But Descano argued that Morrogh’s real reason for opposing the restoration of voting rights was trying to keep former inmates out of jury duties and that the gun control argument was a misdirect.

“If anyone things Terry McAuliffe — Mr. F rating from the NRA — made it easier for people to get access to guns, I have a bridge to sell you,” Descano said. “My opponent didn’t want them serving on juries. We know this was a vestige of Jim Crow. Anybody who knew anything about this knew this was about keeping people of color from voting.”

One of the few topics where Stott and Descano agreed was moving forward with the implementation of body-worn cameras.