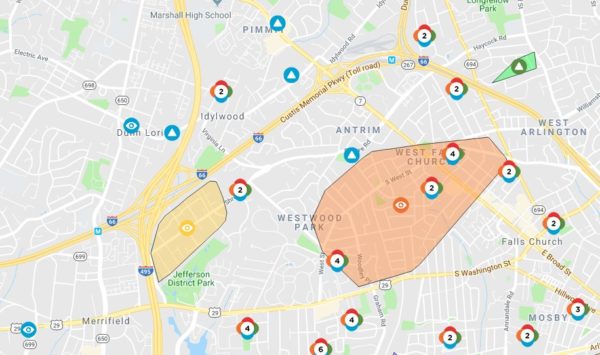 The aftermath of the storm yesterday (Thursday) has left more than 1,300 residents around Falls Church without power and caused several road closures.

The Dominion Energy map shows two power outages currently in Falls Church as of 10:45 a.m. today (May 24) — one affecting 1,009 customers from West Street to Lincoln Avenue and another one affecting 324 customers around Shreve Road above Jefferson District Park.

Dominion expects that power will be restored later tonight for both outages between 6-11 p.m.

Several roads in Dunn Loring and Falls Church were still closed as of 8:33 a.m., according to a released list from the Fairfax County Police Department. FCPD will update the list throughout the day.

The following roads closed in FCPD’s McLean District are:

Local storm reports from the National Weather Service yesterday around 7:30 p.m. reported “a tree uprooted and many large branches snapped” by the intersection of Route 50 and I-495, a large fallen tree blocking Summerfield Road and S. Washington Street and “downed wires and trees” near Jackson Avenue and Summerfield Road.

A few people took to Twitter to share a video of the thunderstorm in Tysons yesterday and spottings of downed trees and power lines.

Driving from Merrifield to Tysons and seeing a ton of downed limbs and branches. Winds here were legit during yesterday’s storms