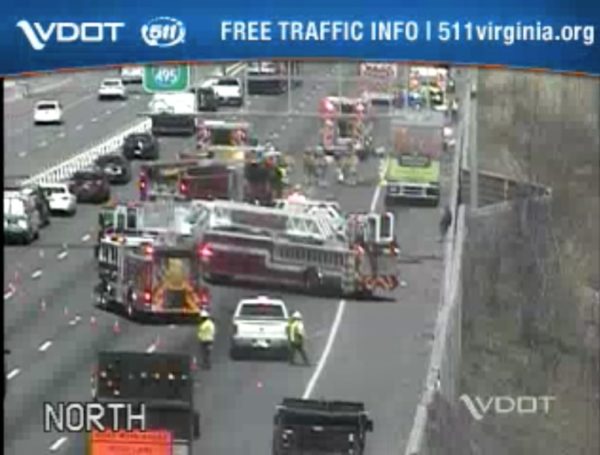 (Updated at 2:45 p.m.) An accident on the Beltway just north of Tysons has northbound traffic cut down to just 1-2 lanes as crews work to contain a large diesel spill.

The incident occurred around 1:30 p.m. just north of the Dulles Toll Road.

Fairfax Fire and Rescue says the spill came from a saddle tank of an 18-wheeler box truck. Hazmat crews have contained the spill, but three lanes remain closed.

Traffic along the northbound HOT lanes is not affected. Video from the overhead (below) shows heavy traffic building prior to the accident scene. Congestion is backed up for northbound I-495 at least to Leesburg Pike.

The incident conjures fresh memories of last week’s tanker crash that shut down traffic on the Beltway for hours, though so far traffic has been able to squeeze by on the lefthand side of the highway’s main lanes.

UPDATE I-495 NB Prior to Georgetown Pike: Leak contained. Fuel does not appear to have entered nearby creek. Units are going back in service. Will be opening up the one lane still closed shortly. #FCFRD #FairfaxCounty #traffic #vatraffic pic.twitter.com/EgGkg5SUSt

Ooof. Hope no one is getting on I-495 NB near McLean, VA right now… #tysons cc @WTOPtraffic pic.twitter.com/qSWXwUl1Rk