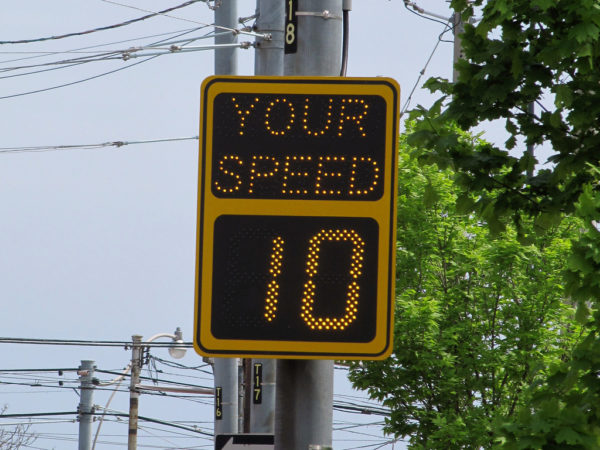 Fairfax County thinks you might need some additional reminders about how quickly you’re driving.

The signs will track data on cars driving on roads with high levels of speeding, while displaying the speed of passing drivers.

The pilot program will run for one year, with four signs purchased. Two signs will be posted at locations around the county, one facing in each direction, and over the year they will be rotated so each district has the sign at least once.

The signs will be posted at each location for six weeks total, with four weeks of being active with one week dark before and after to collect data on whether the signs have an impact on speeding.

Dranesville District Supervisor John Foust noted that approaching the installation as a pilot project seemed redundant, since it’s a well-established technology used by other jurisdictions.

“It seems to me like we’re reinventing the wheel in a lot of ways,” said Foust. “These things have been around for a long time, and we’re treating it like we have to study this or analyze that. We need these things. They work.”

Supervisor Dan Storck was similarly dubious of staff’s assertion that there was limited data on the effectiveness of the signs, given that Arlington County has installed similar signs.

While the current plan is to continually rotate the location of the signs, Foust said the County will likely be able to identify problem areas where the signs will likely need to be put up and left.