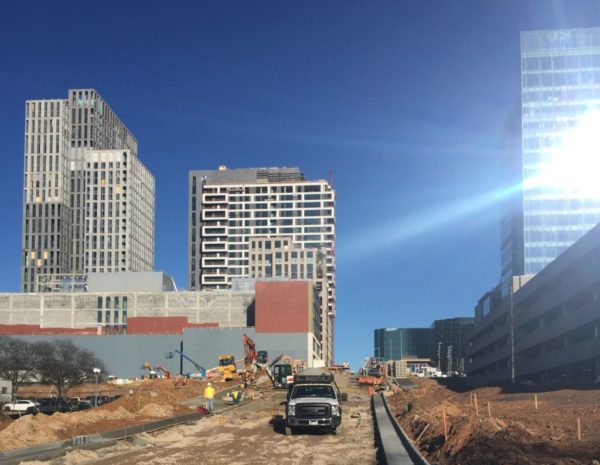 Traffic is not inevitable, and new development does not have to bring new cars.

Arlington County saw an astounding decline of 20 percent in average weekday traffic in just 15 years from 2000 to 2015. That same period saw a growth of nearly 20 percent in population. Certainly, many of Arlington’s new residents drove cars — but not all, and some of its long-time residents must have found new ways to get around.

There are several ways to fight congestion. Most people’s first thought is simply to widen the road. More road, more space for cars, less traffic — right?  The problem is that it won’t work for long.

For economists, mobility can be a commodity like any other. And when the government gives something away for free — in this case, it’s giving away the use of asphalt — of course people will clog the system. When something is available for free people will wait in line, paying with time instead of money. So, if highway engineers widen the roadway, it’s only a matter of years until more cars come along and the traffic is as bad as it ever was.

Another idea might be to slow down new development — but it would be difficult to persuade Fairfax County to forgo all the additional tax revenue.

Third, the county could turn to public transit. The Metro arrived in Tysons in 2014 and, while ridership is increasing, it still lingers below expectations. It was certainly a step in the right direction, but Metrorail was a major investment, and it will take decades of development and improvements to local bus service and sidewalks before it sees full results.

Transportation demand management is not a single technique, but a set of approaches that nudge people out of their cars and towards buses, bikes, walking and working remotely. It’s practiced cooperatively by Fairfax County, the Tysons Partnership and private developers. It often relies heavily on data-driven, highly connected approaches rather than on large infrastructure investments.

One example of a transportation demand management program is the “Guaranteed Ride Home” offered by Fairfax County. This program offers commuters a free trip home up to four times every year. It’s intended for those who would consider a new kind of commute, but who the fear of unplanned overtime or family emergency keeps tethered to their cars.

What Developers Are Doing

For a clearer understanding of what individual developers are doing to cut congestion, Tysons Reporter spoke with Caroline Flax of The Meridian Group, the master developer of The Boro.

Flax described the “pedestrian experience” at The Boro, and the options that will be available to people on foot. By locating residences close to offices, retail, restaurants and Metro stations, Meridian hopes to “create a bite-sized pedestrian experience.”

“We will have a pedestrian-only promenade that connects to Boro Park, and for the other streets we have created wide sidewalks with activated outdoor seating that will create a really inviting pedestrian experience,” she said.

According to the EPA, concerned with carbon emissions from cars, “Research consistently shows that neighborhoods that mix land uses, make walking safe and convenient, and are near other development allow residents and workers to drive significantly less.”

“[Transportation demand management] is about promoting the other transit options available to residents, visitors, and tenants — aside from driving,” she said. Those options include bicycles, buses, and trains.

Caroline emphasized “making [The Boro] accessible in general” — including shared office/commercial parking to efficiently accommodate drivers, wide sidewalks for pedestrians, designated bike parking, Capital Bikeshare, and creating options for easy pick up and drop off by ride-hailing companies like Uber and Lyft. Flax said that she hopes visitors and tenants at The Boro embrace all modes of travel.

Meridian will strengthen its five-minute walking connection to the Metro by supplying new residents with complementary SmarTrip cards, helping them see how easily they can “hop on the Metro and get downtown, or elsewhere in Tysons, really quickly.”

Flax also emphasized the new streets that will help make traffic smoother by creating more options and connections from the main thoroughfares in Tysons: Route 7, Westpark Drive and Greensboro Drive.

Silver Hill Road, connecting from Greensboro Drive to Route 7, is expected to alleviate traffic on Westpark Drive. Another connection, called Broad Street, currently links drivers and pedestrians from Solutions Drive to another new street that connects to Route 7. Once the second phase of the project begins, Broad Street will connect Westpark Drive to Spring Hill Road.

Transportation demand management is a field still in its infancy, as planners and developers find new ways to work toward a more balanced transportation network. People across the country are searching for new tools, and Tysons, frequently dubbed “America’s Next Great City,” will have to work hard to be on the cutting edge.

With the Boro opening soon, Flax concluded by saying, “We’re really excited for everything to come alive… and to show everyone the pedestrian experience we will bring.”