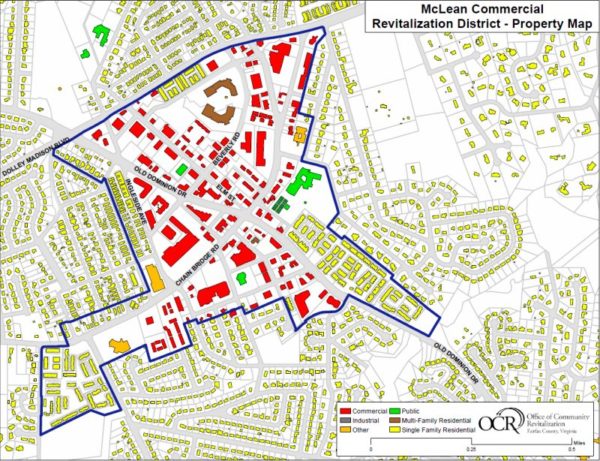 Fairfax County is planning to include McLean in a new targeted economic revitalization plan.

The proposed Economic Revitalization and Redevelopment Zones (ERRZs) would allow developers a 5-10 percent fee reduction for site plan reviews and a partial real estate tax abatement for properties consistent with the county’s Comprehensive Plan. A staff report noted that developments approved through the ERRZ pipeline could also see expedited processing.

The plan is the result of legislation passed by the Virginia General Assembly in 2017 that allowed regulatory flexibility and financial incentives to encourage private sector growth.

“An inter-departmental team developed and vetted with industry a proposal for a program in Fairfax County to provide an economic development opportunity to the private sector consistent with the legislation,” Fairfax County staff said in the report.

In order to qualify for the program, developments would need to have two parcels that collectively comprise at least two acres in size. Smaller acreages could be considered with Board of Supervisors review.

The ERRZs would be located in the Commercial Revitalization Districts first established in 2004.

In addition to McLean, new ERRZs would be established in:

At tomorrow’s (Tuesday) Board of Supervisors meeting, the scheduling of a public hearing for the ERRZ ordinance is included in the items scheduled for administrative approval. If approved, a public hearing would be scheduled for April 9. If adopted, the changes would take effect on Jan. 1, 2020 and would last until Dec. 31, 2029.