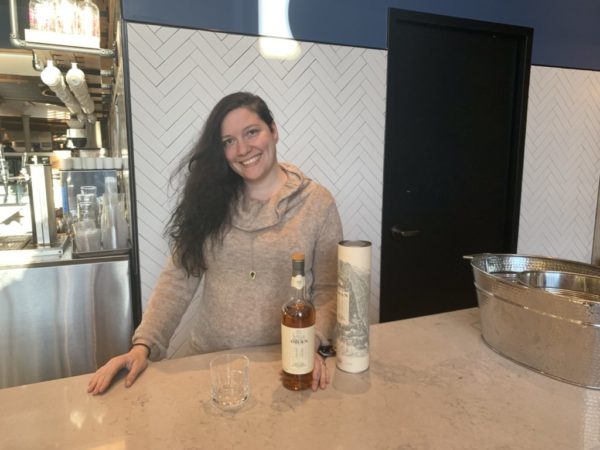 Stomping Ground, the go-to coffee and southern-style biscuits eatery in the Tysons Galleria, opened today (Tuesday) with a new mix of cocktails and more to come.

Becca Leisch, general manager for the Tysons location of Stomping Ground, said the eatery currently has both Bloody Marys and Mimosas — in keeping with the brunch vibe — as well as classics like Dark ‘n’ Stormys and a collection of sipping bourbons.

For Leisch, the pride and joy of the new menu is Oban Scotch, a fine single-malt whiskey from a Scottish distillery that dates back to the late 18th century.

Other offerings include a white cranberry hibiscus cocktail with a live flower in the drink and an Earl Grey-egg white cocktail. The bourbons and cocktails average around $10 each.

In addition to the whiskeys and cocktails, Leisch said the location will have a small selection of beer and wine. For Stomping Ground, the focus is going to be on going as weird as possible, with gluten-free options and a collection of pineapple or blood orange ciders, she said.

Stomping Ground oversees a large seating and sofa section of the Taste of Urbanspace Food Hall, and Leisch said the restaurant is embracing that to cater the menu towards a lounge atmosphere.

“Come sip some bourbon and catch up with friends,” said Leisch. “It’s a reclined atmosphere here, good for dates.”

The restaurant is currently open until 7 p.m. on most nights, or around 8 p.m. on Fridays or Saturdays. Leisch said those hours might creep slightly later, but that the general target for the evening menu is local workers who aren’t quite ready to go home yet or want to avoid rush hour traffic.