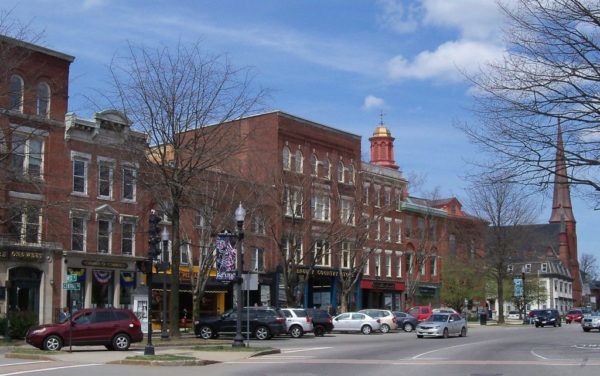 A new survey shows Vienna residents prefer their downtown with classic, small-town brick frontages, rather than the more popular modern designs populating the rest of the area.

The popular sentiment is that the design of new projects on Maple Avenue doesn’t fit with what many people envision for Vienna, so much so that the town is in the middle of overhauling its zoning code following last year’s controversial development discussions.

At tonight’s meeting, the Vienna Town Council will review a visual preference survey for the Maple Avenue Commercial Design Guidelines. The survey collected feedback on what, from a variety of architectural options, best reflected what local residents wanted their town to look like.

With 16 total options, differences in opinion between them was largely marginal, with most ranked around two or three stars out of five.

The most popular facade, with an average rating of 3.28, is based on Keene, New Hampshire. The downtown area depicted shows a series of square, brick buildings more reminiscent of Old Town Alexandria than Tysons. All of the buildings that scored above an average of three stars were the square, red-brick buildings commonly associated with older downtowns.

The least popular of the choices, ranked at an average of 1.6 stars, was a modern-styled brick and glass warehouse design. In general, the buildings reminiscent of trendy redevelopment styles in places like McLean and Merrifield fared poorly in the rankings.

In a ranking of streetscape preferences, the top contender with an average ranking of 3.6 stars showed very wide sidewalks with trees separating pedestrians from the street. All of the top three ranked streetscape designs had similar components.

Streetscapes also had a clear loser, with an average ranking of 1.8 stars. The picture of Fort Industry Square in Toledo, Ohio, had a comparatively narrow sidewalk littered haphazardly with empty pots for plants and old plastic newspaper bins.

There was less variation in what Viennans thought of key intersections and gateways into the town, most of them averaging around two stars. The highest ranked was Merchant Street in Decatur, Illinois, with a metal sign hanging over an entrance. Least popular was a foreboding curved brick building separated from the street by thick foliage.