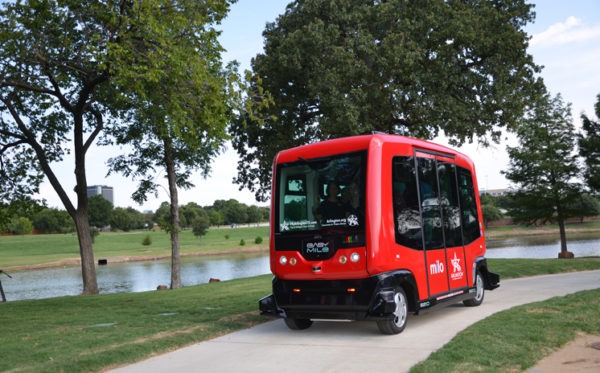 An autonomous shuttle bus between Merrifield’s Mosaic District and the Dunn Loring Metro Station could become a reality, as part of a pilot program pursued by Fairfax County.

Providence District Supervisor Linda Smyth said state officials were in discussions with county economic officials about applying for a grant to bring the project to Fairfax, InsideNoVA reported. But so far, little about the potential project seems set in stone.

A report to the Board of Supervisors on Feb. 12 said Fairfax County was looking at partnering with Dominion Energy and the Virginia Transportation Research Council to introduce a route for a connected and autonomous vehicle (CAV) program.

The project aims to be a “first-mile, last-mile mobility solution” to connect Metro stations with emerging activity centers. As anyone who has walked from the Dunn Loring-Merrifield Metro station to the Mosaic District knows, it’s just far enough to be a pain.

The CAV pilot is intended, in part, to be an important component of VDOT’s broader vision and policies regarding the development and deployment of CAV technology and related demonstration projects throughout the Commonwealth.

The new shuttle would be implemented alongside other public transportation services in the area to assess the viability of CAV shuttles. The report notes Arlington, Texas, as an example of another location to use CAV programs to operate a shuttle service.

The grant money for the program would flow through the state’s Department of Public Rail and Transportation, and be included as part of the Fiscal Year 2020 grant cycle.

Meanwhile, in Reston, self-driving cars could be hitting the street by June.

Photo via City of Arlington, Texas