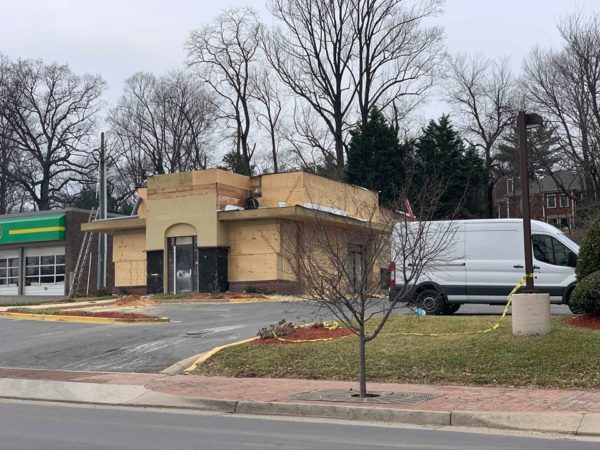 If you want your Starbucks coffee but can’t be bothered to walk into the one on 207 Maple Avenue E., a new drive-through Starbucks is under construction roughly 200 feet away at 362 Maple Avenue E.

The facade of the former Donuts of Vienna, then a Taco Bell post-1997, is currently undergoing renovation. No signs or public information is available on when the new Starbucks will be open.

The new cafe was unanimously approved last April by the Vienna Board of Zoning Appeals.

The alterations to the existing restaurant will include moving the drive-through’s speaker closer to the building and shifting the pick-up window closer to the front. Landscaping will be installed around the perimeter.

Two crosswalks and two bicycle racks are also listed as additions to the site.

One Reddit user, “Futhermucker”, posted an elegy to the departed Taco Bell:

I grew up with this Taco Bell. I’ll never forget rolling in squad deep after middle school — mastering the little balance game on the counter to get a free soft taco with every meal. They removed that game because of us. In high school, I got two out of my five first kisses inside that Taco Bell. It was there that I made a beeline towards after smoking my first joint on the WO&D trail. It was on a 90s retro bench seat there that I broke up with my first girlfriend via text. They were so understanding when my first car’s alternator died in their drivethru, shutting it down for me until the tow truck arrived. Once I got to college, it was always a sweet relief from my mom’s cooking when I came to visit. I watched staff come and go, but it was always the same Taco Bell. If my life was a coming-of-age movie, that Starbucks sign going up would be the ending scene, right before the credits roll. RIP Maple Ave Taco Bell, Vienna didn’t deserve you.