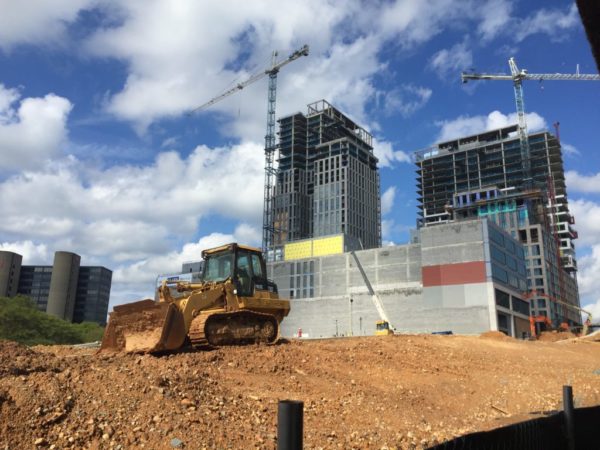 The Boro, one of the largest new developments transforming Tysons, almost didn’t happen — at least not in the form that it’s coming together now. More startlingly, it was also a fight to keep the nearby Tysons Biergarten alive for a transfer to a new site.

At Bisnow’s Tysons State of the Market event last week, several of the developers working on the Boro and surrounding projects met to offer a behind-the-scenes look at the project.

According to Gary Block, chief investment officer for developer The Meridian Group, some of the earlier development plans would have brought new developments online as soon as they were completed, but Block said they decided it was more important to open the development in a series of larger-scale phases.

“We knew we had a tiger by the tail,” said Block, “so after buying land, we tried to combine best of Reston Town Center and Fairfax City center, and we had to globalize and create a phase one that was all things to all people, a different type of retail that would compete favorably with the [Tysons Corner Center] mall. It had to be a different kind of office and a different kind of residential.”

The project also has funding support from the Rockefeller Group, though there was some initial hesitation about investing in Tysons.

“This was the first venture by Rockefeller in Tysons,” said Hilary Allard Goldfarb, regional development officer for Rockefeller Group. “We were nervous, but there’s a lot of office stability here.”

Several developers at the event recognized that developing in Tysons can be a gamble, especially with a portion of the site dedicated to costly residential units.

“It was tough looking at this initially to look at the numbers and justify development,” Bob Kettler, founder and CEO of the construction company Kettler. “But fueling the next wave of vertical construction was the right choice. Greensboro Drive is the Gold Coast of Tysons. It’s the highest land and you now have your core environment, and that is priceless. Now people have to deal with construction costs higher than when this project was priced out. If it was $850 million when [the Meridian Group] purchased it, it’s $1.1 billion today.”

Block said the announcement that Whole Foods would be moving in as a ground-floor retail anchor was a turning point for the development, one that cemented confidence from other investors.

“Whole Foods was a game changer,” said Block. “It’s [going to be] the largest in the country. It’s such a great place and people are going to be so happy with what they’re seeing.”

Now, Block says the final retail spots are starting to fill up.

“It’s like planning a wedding,” said Block, “and we’re down to the last few tables.”

But one of the pieces that almost got lost in the shuffle was the Tysons Biergarten, one of the few bright spots of Tysons’ nightlife. Donna Shafer, managing director for Cityline Partners, said finding a new home for the Biergarten was more of a challenge than she expected.

“There came a point when construction was advancing that [the Biergarten] was looking for a new home,” said Schafer. “We are firm believers in pop-up activities and the Biergarten did a good job of capturing that market. We don’t want these guys to leave Tysons, so we raised our hands and said, ‘We’ve got a lot of real estate, we’re happy to make a home.'”

The Biergarten would eventually land at Cityline Partners’ Scotts Run development, but the permitting for finding that new space was more of a challenge than Schafer had initially expected.

“We thought it would be an easy process, but while we have a fantastic comprehensive plan, there are moments where I think everyone’s heart is in the right place but this plan is operating like code or black letter later,” said Schafer. “So the flexibility has dissipated. So for us, it meant eight months of work, tens of thousands of dollars, and a hundred-page staff report for a pop-up Biergarten. I hope it becomes a pivot point… to help facilitate a good conversation without sacrificing goals.”