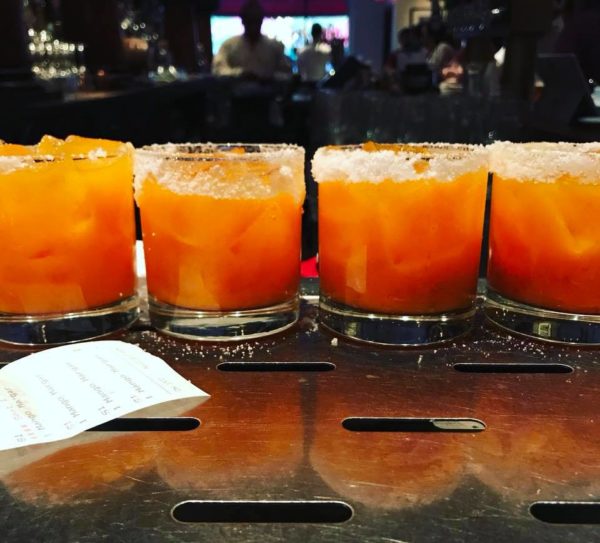 (Updated at 4 p.m.) Happy hour at Chef Geoff’s in Tysons runs from 3-7 p.m., and if legislation passed yesterday (Wednesday) in the Virginia House of Delegates and Senate is signed by Gov. Ralph Northam, the specials during that happy hour may even become public knowledge.

As it is written, current legislation forbids Chef Geoff Tracy and other Virginia restaurateurs from advertising happy hours outside the restaurant. Two-for-one drink specials are illegal and happy hours are not allowed to occur after 9 p.m. Last year, Tracy filed a lawsuit against the state, saying the regulations were a violation of his free speech.

The two companion bills introduced in the Virginia House and Senate to loosen those restrictions passed on a 90-4 and a 40-0 vote. According to the new legislation, restaurant owners would be able to advertise the prices featured for alcoholic beverages and market happy hours “provided those techniques do not tend to induce over-consumption or consumption by minors.”

“From our perspective, the legislation would give us everything we’re asking for,” said Anastasia Boden, a lawyer with the Pacific Legal Foundation, which is representing Geoff in the case. “It would give restaurants the ability to advertise happy hours.”

Boden said she’s pleased by the legislation, but they want to make sure the bills become law before officially dropping their lawsuit. The arguments for the case have finished, and Boden says the firm is waiting to hear back from a decision for the judge.

“Nothing is certain in the legislature,” said Boden. “We’ve had an argument on the merits, now we’re waiting for a decision, so we just have to see what happens first. [If the legislation passes] at that point, there would be nothing left for us to pursue.”

Like Boden, Tracy says he’s happy with what he’s seen in the legislature.

But Tracy also noted that he’s frustrated the arguments over happy hours came to this point in the first place.

“It’s a strange process that we went through. I think it’s interesting that while fighting me and running me ragged all over the place to come up with 50,000 pages of documents while I’m running a restaurant that simultaneously the Virginia ABC was working on legislation to do what I proposed earlier,” he said.

“It’s a weird thing that went down in terms of the process,” Tracy continued. “It’s a big victory for us, but a big loss for Virginia taxpayers, because they footed the bill of this lawsuit while Virginia ABC basically didn’t believe what they were fighting about. It’s a bit of a weird thing, but I’m happy with the result.”