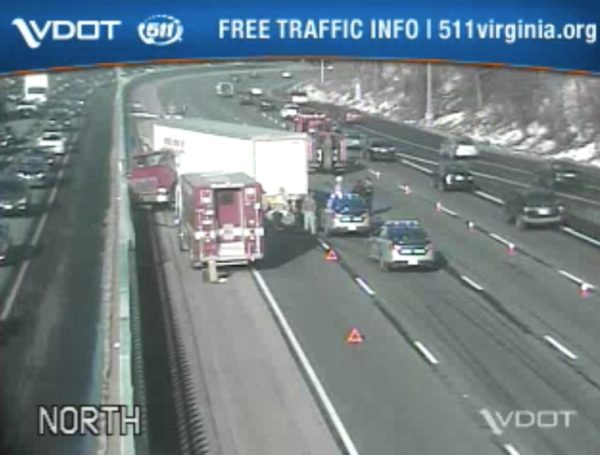 Three lanes of northbound traffic are closed on I-495 are closed near the American Legion Bridge due to a jackknifed tractor trailer.

The crash was reported around 2:30 p.m. on the northbound lanes of the Beltway near Georgetown Pike, just before the bridge. As of 3 p.m., VDOT cameras showed traffic backing up past Tysons to around the Route 7 interchange.

Three lefthand lanes of the Beltway are currently closed. Virginia State Police, firefighters, an ambulance and a heavy duty tow truck are currently on the scene.

Firefighters contained a small fuel spill from the crashed truck, according to Fairfax County Fire and Rescue.

In addition to the northbound delays, traffic heading southbound is also backed up prior to the crash scene, with delays extending to the top side of the Beltway in Maryland.

Units on scene of jack-knifed tractor trailer I-495 NB at Georgetown Pike in McLean. No injuries. Small fuel leak quickly contained by firefighters. Left three lanes of I-495 NB are blocked due to crash. @VSPPIO also are on scene. #FCFRD #traffic #vatraffic pic.twitter.com/3dV60xVXCF

END_OF_DOCUMENT_TOKEN_TO_BE_REPLACED

More Stories
Here’s Where to Meet and Argue With Your State Representatives Next Week in ViennaDrinking, Donations and Dogs Included Among Events This Weekend Around Tysons