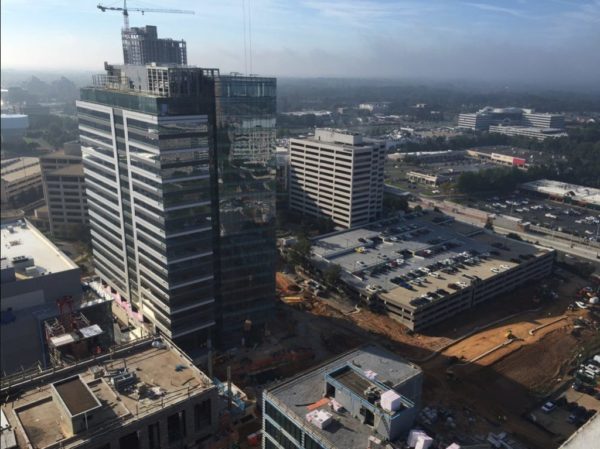 Compared to issues like traffic or a lack of affordable housing, it can seem like a small or pedantic difference, but Drew Sunderland, Director of Communications at the Tysons Partnership, said the effort to rebrand the rapidly urbanizing area between McLean and Vienna as “Tysons” — to “drop the Corner,” so to speak — is part of working towards building a cohesive identity.

“Rebranding Tysons is a core element of our charter,” said Sunderland. “Historically, Tysons Corner is synonymous with the [Tysons Corner Center] mall. It’s a vital anchor, but in terms of the greater community, the mall is a component but it’s not limited to the mall… it’s surrounded by millions of square feet of new development. It’s vital to understand that Tysons is more diverse than just a suburban mall.”

It’s an issue that’s even drawn heated feelings. There is at least one anonymous Twitter account waging a one-user-war on the “Corner” using the hashtag #dropthecorner.

Virginia Case, Chair of the Board for the Tysons Chamber of Commerce, said the change from Tysons Corner to Tysons is part of the area shedding its image as a small suburban community.

“[We tend] to think of it in the way you think of one named people being celebrities,” said Case. “Cher. Madonna. Kesha. It works well for us to be Tysons.”

For advocates of the change, there’s been progress. In 2015, the U.S. Census Bureau, with some urging from the Tysons Partnership and Rep. Gerry Connolly (D),  changed the designation of Tysons Corner to Tysons. Sunderland said the census, labeling Tysons a place identifiable as a settled concentration of population but not incorporated under state laws, is the most official recognition in existence.

The change has had a ripple effect, altering the names on federal mapping agencies and, by extension, its designation on mapping services that use that data like Google Maps. New developments, like The Boro, almost exclusively refer to the area as Tysons.

While many prominent voices in the Tysons area, like the Tysons Chamber of Commerce, are all on board with “Tysons,” at least one local group said they still believe there’s value in the “Tysons Corner” name. Though the group would only speak off the record, a representative said Tysons Corner still has brand recognition.

Other news outlets, for instance, often use Tysons Corner when referring to the area. Some online sites like Twitter, when asking for your address, autofill “Tysons” to “Tysons Corner.”

There’s also the issue of Tysons sharing the name with other established brands. When looking up information on Tysons the news is often saturated with scandals involving Tysons chicken or former boxer Mike Tysons’ ongoing efforts to start a marijuana farm.

“People are always going to mistake your brand,” said Case. “Even my grandmother, whenever she was taking a plane, would take ‘a bluejet.’ We really do look at this place being a landmark.”

Case pointed to Paris as a somewhat bold comparison to Tysons, noting that there is a Paris, New York and a Paris Hilton, but the Paris that claims the landmark status is the one in France.

Case and Sunderland both noted that the name change can sometimes be an uphill battle. Case said most often the confusion comes from people who were from the area when it was still called Tysons Corner and are returning. But when they actually see how the area has changed, Case said most people she talks to understand that the area has outgrown the old name.

“You’re always going to have pushback when you embark,” said Sunderland. “People won’t necessarily understand the purpose behind the change. But if you look out the window, Tysons is a city. There are major high rises. There’s incredible density. We’re a city.”