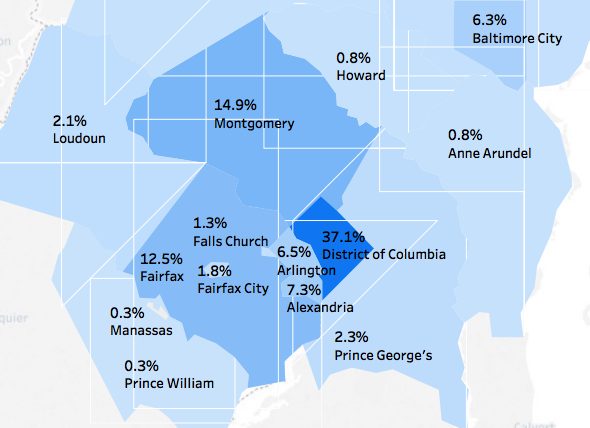 Fairfax startups are economically strong but disproportionately tied to the public sector, even compared to other nearby jurisdictions, according to the 2017 Startup Census.

Adam Zuckerman, founder of census creator Fosterly, spoke to the Fairfax County Economic Advisory Commission meeting earlier this month to offer a recap of Fairfax’s role in the survey of local startups.

In total, 48 companies from Fairfax participated in the survey, while 377 businesses from around the region were surveyed in total.

According to the survey, startups in Fairfax also derived less of their revenue from consumers or private businesses than the regional average.

“If you look towards the larger set, only 11 percent of revenue in the overall set came from the public sector,” said Zuckerman. “So Fairfax County companies have a disproportionate amount of public sector revenue than the larger ecosystem.”

Ryan Touhill, chief of staff for the Alexandria Economic Development Partnership, said in the survey analysis that the regional shift away from a reliance on the public sector is a positive trend for local economic diversification.

The survey also found that the top five industries in Fairfax for startups were technology and services, computer software, real estate, financial services, and management and consulting.

There was one unfortunate item of news about one company in particular: Fosterly, the company running the census. Unless another organization takes over the mantle, Zuckerman says this year’s census will be the last.

“We’re not doing it again this year,” said Zuckerman. “We’re going to be talking to a few entities to see if they want to continue the census… but the resources weren’t there.”