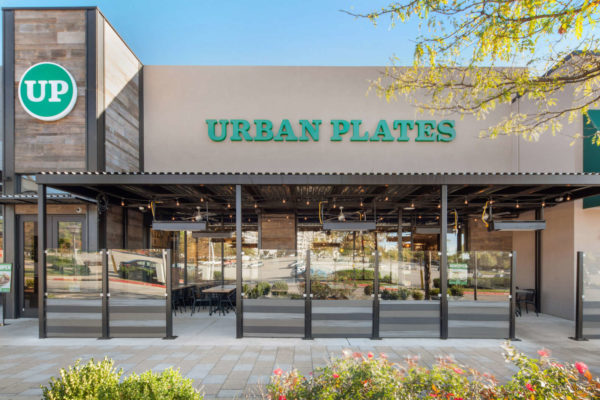 Wednesday was a busy day for presidents past and present, but in between witnessing Joe Biden’s inauguration and paying their respects at Arlington National Cemetery, ex-Commanders in Chief Bill Clinton, George W. Bush, and Barack Obama grabbed a bite to eat — courtesy of Urban Plates.

Preparing lunch for three former presidents and first ladies was a joint effort by all three Urban Plates restaurants in the D.C. area, including the staff at the Tysons Galleria venue, according to Urban Plates spokesperson Hannah Jacobs.

“Urban Plates is honored to have been chosen to serve,” Urban Plates said in a press release. “We believe that delicious, affordable food made with quality ingredients is something that everyone should have access to — and that’s something we can all agree on.”

Food served to the former White House occupants included a chicken cobb salad and sustainable grilled salmon. Urban Plates says the dishes were “hits” but declined to elaborate on who ordered what “out of respect for their privacy.”

To commemorate the occasion, the restaurant will donate 129 meals to frontline healthcare workers: 42 meals on behalf of Clinton, 43 for Bush, and 44 for Obama.

The donations are being made through Urban Plates’ Nourishing Heroes program, which allows customers to sponsor a meal for healthcare, police, fire, and military service workers by donating $12 when purchasing food. The restaurant matches every donated meal up to 1,000 meals per week.

“Our mission is to make craveable, wholesome, and clean food accessible to all,” Urban Plates co-founder and CEO Saad Nadhir said. “We are proud to have delivered on that promise to three former presidents, first ladies, their supporting staff, and a group of Arlington Cemetery groundskeepers and workers on Inauguration Day.”

City of Falls Church police do not anticipate any “direct threat” to the city or Northern Virginia as a whole in connection to today’s presidential inauguration, Chief of Police Mary Gavin told the city council during a virtual work session Tuesday night.

Even with no active threat, however, Gavin clarified that the police department is still taking precautions with potential threats stemming from the inauguration of President-elect Joe Biden and Vice President-elect Kamala Harris in D.C.

“As a region we have worked each and every day, and every day of the week trying to fortify the Commonwealth,” Gavin said. “Every chief and sheriff have met face to face throughout the week on different aspects of the regional position and posture.”

Gavin also noted that there was “chatter and discussion” around Jan. 6 and in the following days from extremist groups about potentially disrupting transportation into the District and disrupting the inauguration.

She stated that she and other law enforcement officials in the region are working in collaboration with Arlington County and Virginia State Police to close roadways and enhance security at local airports. Each official is also receiving several intelligence briefings per day regarding safety measures related to the inauguration.

Gavin also said focal points of concern from intercepted chatter revolved around government facilities, including federal, state, and some local buildings. However, she clarified that there was nothing specifically mentioned and law enforcement has fortified traffic patterns.

The City of Falls Church Police Department is doubling the number of officers and sheriffs on the street and around city hall throughout the day and night on Wednesday.

“Each and every police department and sheriff’s office throughout this region has taken a posture of up staffing for [Wednesday],” Gavin said.

Gavin added that high-profile surveillance will be provided at the high school, hotels, shopping centers and special landmarks throughout the city. She also said there will be response teams ready in case of “any type of assaults, protests or any assemblies.”

She also said that while there has not been any specific chatter or threats to private businesses, there will be resources in the community to watch and secure the business district. 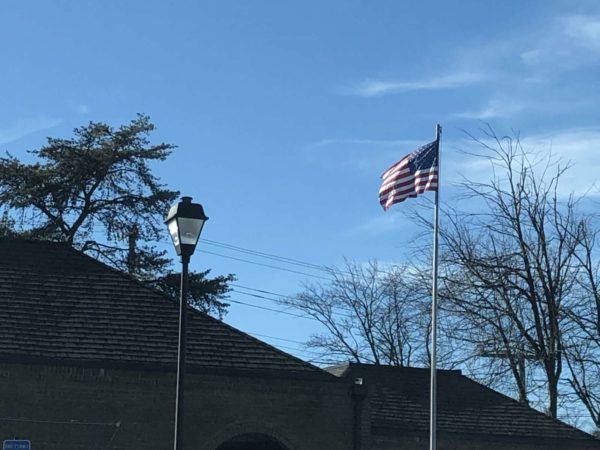 What to Know About the 2021 Presidential Inauguration — Inauguration Day has arrived, and with it came a host of street closures and transportation service changes in the D.C. area, as local public officials advised residents to stay home and avoid traveling downtown. [Fairfax County Emergency Information]

FEMA Declines to Reimburse Virginia for Capitol Riot Response — “The Federal Emergency Management Agency has denied requests from Maryland and Virginia for an emergency declaration to cover expenses associated with responding to the Capitol riot and increasing security around President-elect Joe Biden’s inauguration.” [The Washington Post]

MetroWest Developers Look to Bring New Apartments to Vienna Metro Station Area — “Pulte Homes and the CRC Cos. are both pushing ahead with new construction on the 56-acre site, located just across Interstate 66 from the Vienna/Fairfax-GMU Metro stop. The companies could start work in 2021 after years of delays on what would eventually be a combined total of six buildings with at least 980 units and 41,500 square feet of retail.” [Washington Business Journal]

1st Stage Teams Up with Tysons Regional Chamber of Commerce on Food Drive — Food donations for the Capital Area Food Bank can be dropped off at the 1st Stage theater and offices between 10 a.m. and 2 p.m. from today through Friday, and from 12-4 p.m. on Saturday (Jan. 23). [1st Stage Theatre/Twitter]

Cunningham Park Elementary School Students Learn About Government with Mock Election — First graders at Cunningham Park got a virtual chat and tour of Vienna Town Hall with Mayor Linda Colbert before participating in a fictional mayoral election with storybook characters as candidates. [FCPS] 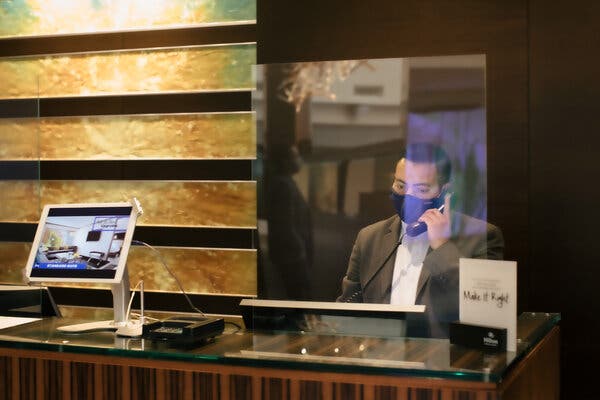 Hotel rooms have suddenly become difficult to come by in Fairfax County ahead of Inauguration Day on Wednesday.

That is a welcome problem for the lodging sector of the hospitality industry, which has been in a downward spiral since the COVID-19 pandemic prompted a slew of travel restrictions and stay-at-home health guidance.

But this inauguration will be unlike any other in recent political history. The general public’s ability to attend President-elect Joe Biden and Vice President-elect Kamala Harris’s Oath of Office ceremony has been sharply curtailed due to the pandemic, but hotels are hosting another large group of guests: the National Guard.

Up to 21,000 members of the National Guard have been authorized to come to D.C. and secure the city ahead of potential attacks, after Trump supporters stormed Capitol Hill on Jan. 6. Fairfax County hotels are reportedly housing some of the 15,000 guard members already in the D.C. metropolitan area.

“We are indeed hearing anecdotally from hoteliers that there has been an uptick in reservations compared with the past 11 months, but we are unable to ascertain whether those reservations are directly related to the inauguration and/or the National Guard or people who are visiting for leisure or business travel,” Visit Fairfax President and CEO Barry Biggar said in a statement.

The pandemic and ensuing shutdowns devastated the hospitality industry across the U.S. In Virginia, COVID-19 has resulted in the loss of about 100,000 jobs, according to the American Hotel and Lodging Association.

In November, the AHLA found that 71% of its member hotels said “they won’t make it another six months without further federal assistance given current and projected travel demand.” 47% of respondents said they would be forced to close hotels.

Many hotels were forced to layoff more staff this winter, even as access to the second round of the Paycheck Protection Program has expanded to all lenders.

But the employees who remain taking the sudden surge of guests in stride, Biggar explains.

“What we do know is that our hotels have been working tirelessly, even with staff shortages and for long hours, to ensure that our guests are treated with the utmost hospitality,” he said. 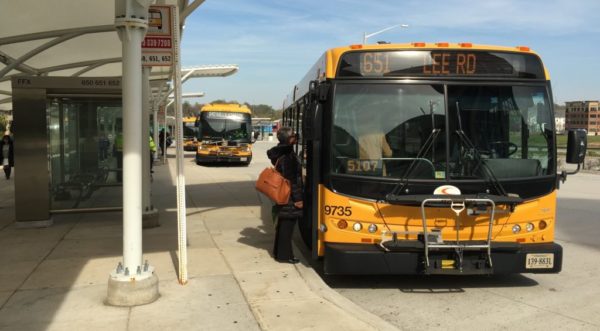 Updated at 1:10 p.m. on 1/19/2021 — Fairfax Connector announced today that the changes to its bus service for tomorrow’s inauguration have now been extended through Thursday (Jan. 21).

Fairfax Connector Routes 697 (Stringfellow Road Park and Ride – Downton D.C.) and 699 (Fairfax County Government Center – Foggy Bottom) will continue to operate as free shuttles to the Vienna Metrorail station through Thursday, Jan. 21, 2021, adding an additional day to the service detour. Passengers should take the Metrorail Orange Line to complete their trip into Washington, D.C.  Fairfax Connector staff will continue to monitor road closures and make a determination about Friday as the week goes on.

Earlier: With only a week left until President-elect Joe Biden’s inauguration, Fairfax Connector announced that two bus routes will stop operating today (Wednesday) through Jan. 20 due to planned road closures in Washington, D.C.

Route 699, which normally travels between the Fairfax County Government Center and downtown D.C., will instead serve as a free shuttle to transport riders from the government center park and ride to the south entrance of the Vienna Metro station.

⚠️ Due to road closures for Inauguration, Route 697 will not operate into DC starting immediately through Wednesday, Jan. 20, 2021. Passengers should use shuttle between Stringfellow P&R and Vienna Metro South. Use alternative Routes 631, 632, & 634. Thanks for your patience.

⚠️ Due to road closures, Route 699 will not operate into DC starting immediately through Wednesday, January 20, 2021. Route 699 will shuttle passengers (free of charge) between Government Center Park & Ride and Vienna Metro South. Thanks for your patience.

Fears that the violence that embroiled the U.S. Capitol last week could return during the lead-up to Inauguration Day have put the D.C. region on edge, prompting thousands of National Guard troops and federal, state, and local law enforcement officers to mobilize for the National Special Security Event.

Fairfax County Board of Supervisors Chairman Jeff McKay joined other local and state public officials in warning community members against traveling to downtown D.C. on the day of the inauguration and the days preceding it.

“Sadly, the terror that occurred at the U.S. Capitol on January 6, 2021, was not a contained or isolated incident, and there is continued concern that similar violence is an ongoing threat to Americans and our democracy,” McKay said in a statement today.

The chairman says that the Fairfax County Police Department has been in contact with D.C. police about “the evolving situation” and has increased its presence in “key areas” of the county.

McKay advises residents to stay home if possible, avoid downtown D.C., and report any suspicious activity to police at 9-1-1 or the FCPD’s non-emergency line at 703-691-2131.

“Fairfax County will do all we can to help our partners in the region ensure a peaceful and safe transition of power on January 20, 2021 because that is the will of Fairfax County residents and the majority of Americans across the country,” McKay said.