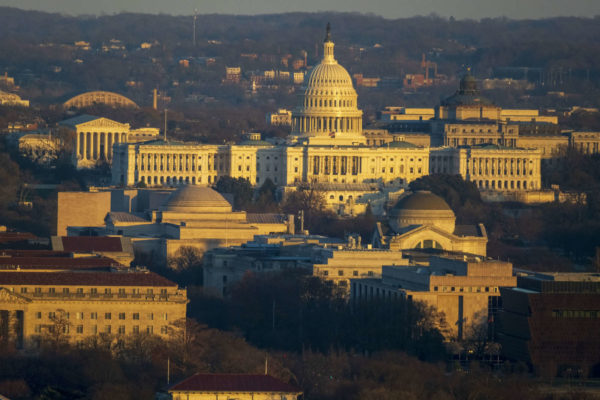 Local elected officials from the county to the state level expressed horror and sadness at yesterday’s assault on the U.S. Capitol in Washington, D.C., as Congress worked to certify the results of the 2019 presidential and Congressional elections.

Thousands of supporters of President Donald Trump — some of them associated with right-wing extremist groups like the Proud Boys — broke into the Capitol, disrupting the certification process and forcing federal lawmakers to shelter in place as the building went into lockdown.

D.C. police reported last night that four people died in the chaos, and 52 people had been arrested, mostly in relation to violations of a curfew instituted by D.C. Mayor Muriel Bowser.

While Fairfax County was not as directly affected as nearby Arlington County and the City of Alexandria, which were both put under a curfew, the county joined the emergency response by deploying officers with its police department’s civil disturbance unit and opening its emergency operations center to the Virginia State Police.

The Fairfax County Police Department also stepped up its presence in the county as officials monitored areas they suspected “may see increased activity,” Fairfax County Board of Supervisors Chairman Jeff McKay said shortly before 6 p.m. yesterday.

McKay described the events in D.C. as “nothing short of a coup” and a “dark day for American democracy,” sentiments that Providence District Supervisor Dalia Palchik says she shares.

“I am appalled at the situation in our nation’s capital, and know that our region and country deserve better,” Palchik said in a Facebook post. “Thank you to the Fairfax teams stepping up to ensure safety across our community.”

Hunter Mill District Supervisor Walter Alcorn urged residents to “stay home, stay safe and reach out to neighbors and friends who may be feeling frightened or isolated.”

Del. Marcus Simon (D-53rd), State Sen. Richard Saslaw (D-35th), and Falls Church City Mayor David Tarter commented on the riot in D.C. during a virtual town hall  hosted by the City of Falls Church. The meeting was intended to give community members a chance to learn about the upcoming Virginia General Assembly session.

Their thoughts, along with a statement from Del. Mark Keam (D-35th), can be found below:

Things like concession speeches and phone calls you make to your opponents, they’re not just niceties, they’re not just fakery or formalities: They’re important parts of the process. It’s really essential that people see us make those concessions…and acknowledge the outcome — even when it’s not the outcome we want. As we are learning, our democracy is fragile and really relies on the consent of the governed.

Just disgraceful. It’s like we’re a banana republic. Everybody knows who is to blame for that, where it emanated from. It shouldn’t have been tolerated, quite frankly. It should’ve been dealt with a lot more harshly than what I saw.

Today, lawless rioters laid siege on the seat of our democracy. These rioters are not a cause but a symptom — a symptom of a disregard for the rule of law, democratic institutions, and the constitution by our president and those who enable him. They’re the consequence of the President’s words and incitements, falsely spreading doubts about the legitimacy of a fair election, inciting discord and violence, and refusing to abide by our country’s long-standing democratic norms. Nothing could be more un-American. It’s not who we are. Today’s events underscore the importance of responsible leadership at every level. Public service is not just a privilege but a grave responsibility. Every action matters and every word counts. Let’s hope days of better leadership and reconciliation are ahead of us. These are trying times, but having the support of our state legislators makes all the difference.

Before becoming a naturalized citizen, or working as a Capitol Hill staff, or being elected to the state legislature, my family and I survived two third world countries that had experienced coups and wars. That is why an aspect of America I respect the most is how we change political leaders peacefully, and not resorting to violence.

I am completely shocked and profoundly saddened by what I saw happen at my former workplace. I hope and pray that our nation is strong enough to withstand this failed coup attempt, and that more Republican patriots will speak out against this unAmerican behavior and hold accountable those who inspired such violence and insurrection.