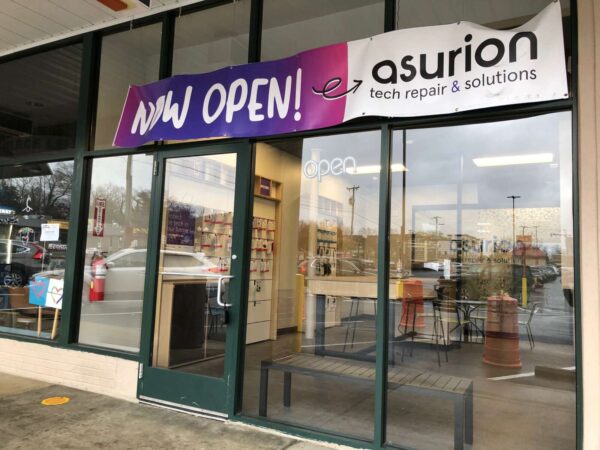 A new technology repair store has arrived in Vienna, just in time to assist anyone already encountering issues with the phone they got for Christmas.

Asurion Tech Repair & Solutions — a national chain of electronics and appliance repair franchises — announced last week that it recently opened its latest location in Vienna Shopping Center (136D Maple Avenue). The store occupies the space next to Ben & Jerry’s that was previously filled by Motophoto.

The store is scheduled to host a grand opening celebration from noon to 2 p.m. on Saturday (Jan. 8) that will include refreshments, discounts, giveaways, and other attractions, according to a press release.

“We are excited to bring Asurion Tech Repair & Solutions to Vienna,” Asurion District Manager Graham Pointer said by email. “It’s a rapidly developing area that combines a small-town feel with thriving businesses. We are eager to be at the forefront, anticipating and responding to the technological needs of this community.”

With more than 650 stores in the U.S., Asurion Tech Repair & Solutions fixes consumer electronics, including phones, computers, and gaming consoles, according to its website. The press release says diagnostics on all gadgets are free, and there is a 90-day limited warranty for all repairs.

The retailer was originally known as uBreakiFix but is now undergoing a nationwide rebranding after it was purchased by the global technology insurance company Asurion in 2019.

The Vienna store is Asurion’s 26th location in Virginia. The company also has venues in Fair Lakes, Falls Church, Springfield, and Herndon.