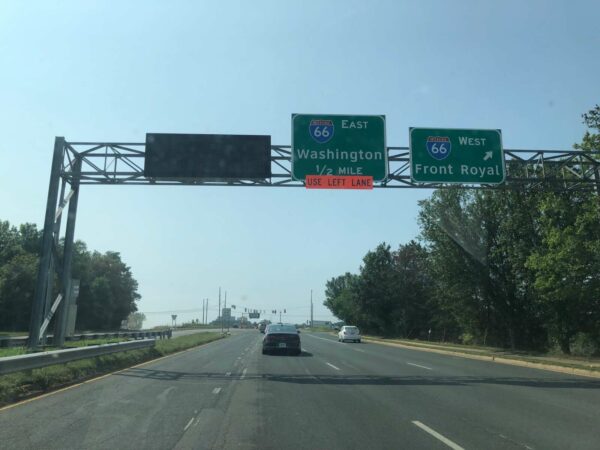 The effort to widen I-66 outside of the Capital Beltway will take one small step forward this weekend with the opening of two new, permanent ramps at the Nutley Street interchange south of Vienna.

Weather permitting, loop ramps from Nutley Street South to I-66 East and from Nutley Street North to I-66 West are scheduled to respectively open overnight on Friday (Oct. 1) and in the early morning on Monday (Oct. 4), the Virginia Department of Transportation announced today (Wednesday).

Under construction throughout the summer, the new ramps will end the use of a temporary traffic signal that directed Nutley Street drivers to turn left in order to get onto I-66.

With the I-66 West loop ramp opening by 5 a.m. on Monday, the existing left-turn ramp will permanently close around 8 p.m. on Friday so construction crews can conduct paving work, according to VDOT.

Traffic will be directed north to the Virginia Center Boulevard intersection, where drivers must make a U-turn from the turn lane farthest to the left, stay to the right, and follow signs to I-66 West.

In addition to opening the ramps, VDOT will move travelers in Nutley’s northbound lanes to the west side of the bridge over I-66, which will have two travel lanes in each direction. The change is expected to remain in place through January.

Pedestrians on the west side of Nutley Street will still have access over I-66 between the Virginia Center Boulevard/Marshall Road and Saintsbury Drive/Swanee Lane intersections after the traffic shift takes effect overnight on Friday.

“This temporary traffic pattern will allow construction of the new Nutley Street Interchange to advance while keeping Nutley Street open to vehicles and pedestrians,” VDOT says.

A temporary ramp from I-66 West onto Nutley that opened in February will also stay in place to accommodate ongoing work on the new interchange, which is part of VDOT’s multibillion-dollar Transform 66 project to extend the I-66 Express Lanes from I-495 in Dunn Loring to Gainesville.

“When construction is complete, the rebuilt interchange will feature two roundabouts, which will provide safer, more efficient travel for vehicles entering and exiting I-66, and improve safety for vehicles and pedestrians traveling on Nutley Street,” VDOT says.

The new toll lanes are scheduled to open in December 2022.