Updated at 5:05 p.m. on 1/29/2021 — The opening of a temporary ramp from I-66 West to Nutley Street has been postponed to next weekend due to anticipated inclement weather, the Virginia Department of Transportation announced today.

Earlier — Drivers exiting onto Nutley Street in Vienna from Interstate 66 West will be directed to a new, temporary ramp starting Sunday (Jan. 31).

Here are the details from VDOT on the new traffic pattern, which is expected to stay in place for approximately 18 months:

A temporary traffic signal will be installed while the temporary ramp is in place so that drivers headed south on Nutley can turn left.

To complete paving work for the change, the Virginia Department of Transportation will close the existing ramp from I-66 West to Nutley Street North from 8 a.m. to 6 p.m. on Jan. 30 and 31.

During that time, drivers looking to get off of I-66 West will be detoured to the exit for the Vienna Metro station. They will then have to stay right on Country Creek Road and Virginia Center Boulevard to reach Nutley. 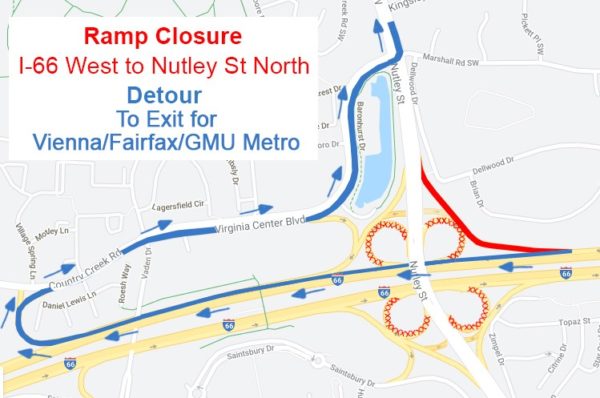 According to VDOT, the new, temporary I-66 West exit ramp is needed to accommodate construction on a new Nutley Street interchange as part of its Transform 66 Outside the Beltway project.

When construction is finished, the new Nutley interchange will have two roundabouts, which VDOT says “will provide safer, more efficient travel for vehicles entering and exiting I-66 and improve safety for vehicles and pedestrians traveling on Nutley Street.”

The department also notes that all work is weather dependent and will be rescheduled if there are inclement conditions.

“Drivers should always use caution and pay attention to lane markings and roadway signs in construction work zones,” VDOT says in its news release.