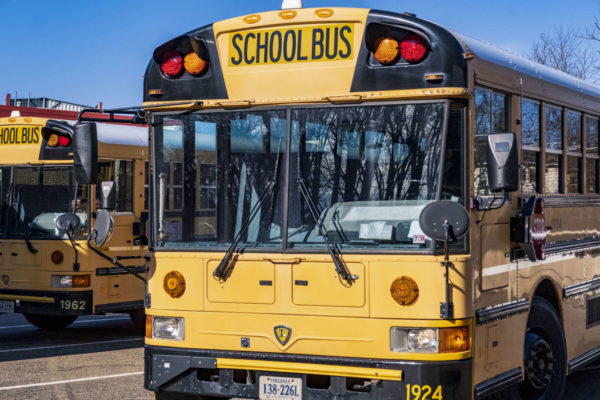 Just days before the new school year is set to begin, Fairfax County Public Schools says it hasn’t hired enough bus drivers to fully serve the thousands of students who rely on the bus fleet to travel to and from school.

In a message posted to its social media channels, FCPS advised parents to walk with their children or drive them to school if possible, stating that “there may be delays impacting bus routes” across the county when school starts on Monday (Aug. 23).

FCPS says it is unable to provide exact numbers for the gap in staffing “because the situation is so fluid,” but the shortage is part of a nationwide trend that has resulted in reports of buses arriving hours late or not showing up at all from Stafford County and Lynchburg City to Milwaukee, Wisconsin, and Broward County in Florida.

“Like other school districts across the country, we do have more shortages than is usual for this time of year,” FCPS spokesperson Julie Moult said. “We are actively recruiting and offering a $2,000 signing on bonus and are working to limit any potential disruption.”

Moult added that students will not be penalized if they are late to class due to a delayed bus.

The bus driver shortage is the latest instance of staffing challenges interfering with efforts to resume five days of in-person learning for more than 180,000 students in Virginia’s largest public school district.

After the COVID-19 pandemic prompted a shift to virtual learning in March 2020, teachers’ wariness of returning to physical classrooms earlier this year led FCPS to hire hundreds of classroom monitors that provided support and supervision for in-person students.

FCPS then delayed its Extended School Year classes for students with disabilities this summer, because it didn’t have enough teachers, especially for its special education program.

According to an ABC News report, it’s not unusual for schools to be short-staffed on bus drivers at the beginning of an academic year, but this year’s deficits have likely been exacerbated by health concerns: buses provide little space for distancing even when many students were still learning virtually, and drivers are often retirees, a demographic that has been hit hard by the pandemic.

The Fairfax Education Association, an FCPS employees’ union that represents more than 400 transportation workers, said in a statement that it believes higher pay would help alleviate the driver shortage:

We certainly know that our transportation staff play an important role in the lives of our students. This shortage will potentially delay the start of a school day, force multiple runs to cover all routes, and put drivers into a position of driving many more students than should be considered safe on a bus during this COVID-19 pandemic. Social distancing will not be possible. Masks will be required. We believe that increases to hourly wages, in addition to the signing bonuses, would attract and especially retain our current drivers and attendants. We are committed to working with FCPS to address this situation.

FCPS says on its website that the shortage will require available drivers to more regularly cover two scheduled routes back-to-back that typically would be served by two different buses. These “double back” runs may affect pick-up and drop-off times before and after school.

FCPS has set up a webpage that will list delayed buses, which can also be tracked through the Here Comes the Bus mobile app.

“We understand that any transportation delay is frustrating and has an impact on the entire family,” FCPS said. “Thank you for your flexibility as we work through some of our challenges with transportation this fall. Our goal is to serve each and every one of our students and our families with safe, efficient transportation.”

Read more →
More Stories
JUST IN: FCPS will require employees to get vaccinated by late OctoberStay in the know with the Tysons Reporter daily newsletter