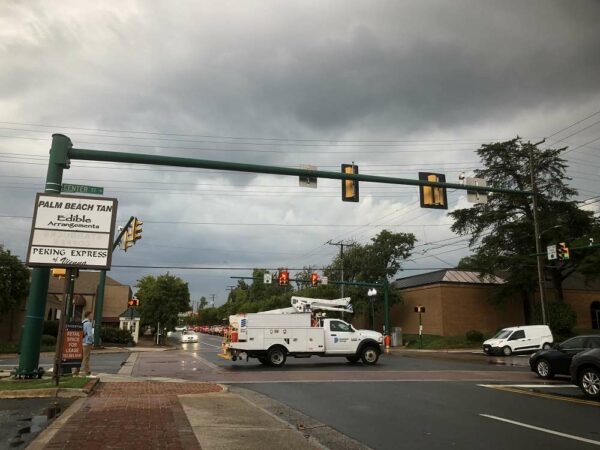 Updated at 9:45 p.m. — Metro has restored service on the Orange Line between Vienna and East Falls Church after it was suspended earlier due to a power outage at the West Falls Church Metro station.

Earlier: A thunderstorm has taken out power for thousands in the Tysons area, particularly around Vienna, Falls Church, and Merrifield.

The National Weather Service issued a Severe Thunderstorm Warning for northeastern Fairfax County at 5:12 p.m., though by that time, the rumble of thunder had likely alerted anyone in the area.

Moving east at 15 miles per hour, the storm brought 60 mile-per-hour wind gusts, according to the NWS, which warned about the potential for fallen trees and large branches.

“This could injure those outdoors, as well as damage homes and vehicles,” the alert said. “Roadways may become blocked by downed trees. Localized power outages are possible. Unsecured light objects may become projectiles.”

Prob should have put the umbrellas down in Tysons. This poor guy. @nbcwashington pic.twitter.com/9SZTfvOlrd

At least 51,423 Dominion Energy customers in Fairfax County are now without power, according to the site PowerOutage.US.

Dominion Energy’s outage map shows many of the outages concentrated in Falls Church, Merrifield, and Vienna, where businesses in the commercial area along Maple Avenue and Church Street were among those that lost electricity.

Dominion Energy generally estimates that power will be restored between 7 p.m. and midnight, though the cause of some outages is still under investigation. Most of the outages have been attributed to out circuits, but one affecting more than 5,000 people around Vienna and Oakton is the result of a tree falling on a power line.

Metro has suspended service on the Orange Line between Vienna and East Falls Church due to a loss of power at the West Falls Church station. The transit agency says shuttle buses have been requested.

Power out in Dunn Loring too pic.twitter.com/xwAP95RWMY

Even with the thunderstorm, Fairfax County can expect little relief from the summer heat and humidity over the next couple of days, with the heat index expected to surpass 100 degrees tomorrow and on Thursday (Aug. 12).