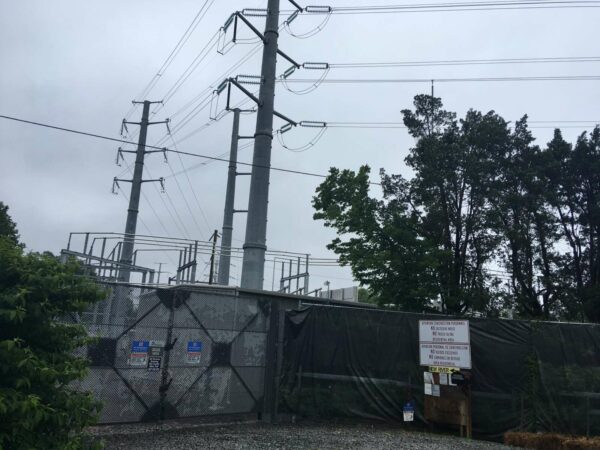 The State Corporation Commission is reviewing whether Dominion Energy could extend a substation project that has frustrated, irked, and baffled residents to 2026.

Hearing officer Ann Berkebile said Thursday (June 10) that she will issue a report following public testimony in which residents detailed their frustrations over a project to rebuild the Idylwood Substation on Shreve Road.

“The first thing I want to note is how disheartening it is to be contemplating construction in our community until December 2026,” said Lori Jeffrey, president of Holly Crest Community Association, further saying delays and excuses from Dominion have occurred throughout the project and residents have learned to not accept the company’s statements at face value.

Dominion didn’t respond Friday to a request for comment. Attorneys for the company as well as county and other parties didn’t question witnesses when given the opportunity at Thursday’s hearing. Fairfax County didn’t address a media inquiry by press time.

Approved by the county in 2015 and the SCC in September 2017, the project calls for rebuilding, relocating, and replacing facilities and lines in and around the existing substation.

Dominion has said the proposed enhancements will “provide seamless, reliable power to Fairfax County, the cities of Falls Church and Fairfax and support the energy needs of the Metrorail.”

In justifying the extension, the utility company has cited the complexity of the project as well as lengthier permitting processes than expected and acknowledged that it underestimated parts of the timeline, among other factors.

“The Company is cognizant of the amount of time this Project has been in process and the strains the Project has placed on the surrounding community,” Dominion said in a March filing with the state detailing why it’s seeking a six-year extension.

During Thursday’s hearing, Collin Agee, a Holly Manor Drive resident, said work on the project started in 2016, five years ago.

The 2017 application approved by the state had the ability for an extension — provided it got the SCC’s approval. A May 31, 2020 deadline is currently suspended, according to the commission, a regulatory entity that has authority over utilities.

Tensions between Dominion and local interests have been developing, though, with the company proposing a new timetable to finish by Dec. 31, 2026. The project cost has also increased from around $107 million to $159 million as of February, according to the company.

The conflict continued at Thursday’s hearing, which will help the three-member commission make a determination. Hearing officer reports typically have a 21-day comment period by the formal parties in a case, according to the commission.

For homeowners like Andrew Laine and his wife, who plan to retire and relocate, that’s concerning. Laine said they previously rented their home for three years during the time the project began, and construction work behind their home led their family to say they wouldn’t have rented there if they had known about the extent of the project.

“Dominion has not been upfront with anything,” Laine said.

The three driving factors of the project are addressing power reliability regulations, increasing operational efficiency, and maximizing space for potential expansion, according to Dominion.

“Continuing to terminate lines and add load to the Idylwood Substation with [its current] arrangement would increase the severity of a breaker failure event,” the company said previously.

Catarina Couto, the previous president of the Holly Crest Community Association, told Tysons Reporter that Dominion presented a project in 2013 with a much smaller footprint than what they were going to do. Couto said residents kept pushing for more information, and the company wasn’t forthright and honest with the neighborhood.

She asked the state at Thursday’s hearing to help neighbors in keeping the company accountable, arguing that 2026 was too long of a timetable.

“At this point, we have lost trust in Dominion’s ability to provide us with anything that is of tangible or valid information,” Cuoto said. “They have continuously pushed the agenda, they have received various…extensions, and they have caused our neighborhood great, great grief.”