Fairfax County is designing restoration plans for an eroded stretch of Little Pimmit Run from Franklin Park Road to just upstream of Kirby Road in McLean.

The $9.23 million project will address 7,100 feet of degraded stream channel in addition to about 1,250 feet of tributaries, which will be restored so that they tie into the main channel of Little Pimmit Run.

“The water has a lot of energy and it’s causing a lot of erosion,” project manager Fred Wilkins said during a recent meeting.

According to Wilkins, the project aims to slow the speed of the water, which will protect infrastructure and area vegetation. It will also restore the ecology of the stream and the surrounding area, while preventing sediment and pollutants from flowing from Little Pimmit Run into the Chesapeake Bay.

Identified in 2019, other problems caused by the ongoing erosion include undercut banks and compromised trees, the county’s project page says.

Wilkins says another goal of the project is to protect infrastructure.

“There are multiple locations where we have sanitary pipes that cross the stream bed, and in some cases, the water can move debris that can damage the sanitary crossings, as shown during the 2019 storm, which caused emergency repairs to be needed,” he said.

Last but not least, the project manager said the county aims “to give the community something to enjoy.”

The project will unfold in two phases, starting with a stretch of stream from Franklin Park Road to Chesterbrook Road that runs parallel to Solitaire Lane. The second phase picks up north of Chesterbrook Road and goes away the way to Kirby Road.

Right now, county officials are deliberating the future alignment of the channel. Once one is chosen, concept designs should be ready to be submitted this September 2021. A community meeting is slated for November.

There will not be a construction timeline until the designs are completed.

The project straddles private property and county property, and will require coordination between the county and property owners, Wilkins said.

People in the area can expect to see flagging and survey markers over the next several months, according to the county’s project website.

“Survey markers do not necessarily mean that the marked tree will be removed,” the website said.

This restoration work joins another stream restoration project along the channel between Forest Lane and North Albemarle Street, along with a sewer realignment project, emergency wastewater stabilization, and a Fairfax County Department of Transportation sidewalk project, Wilkins said. 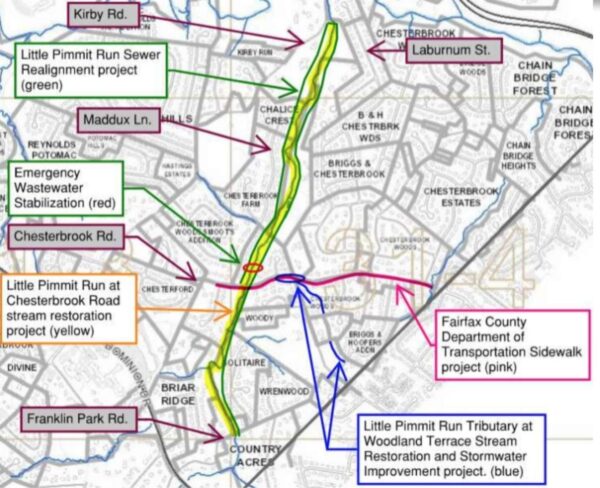 The project is being funded through the county Stormwater Service District.