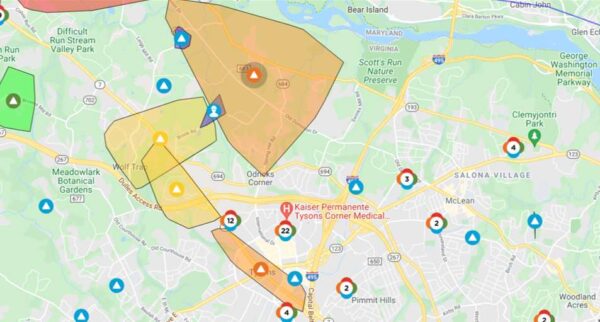 Updated at 6:05 p.m. — High winds have led to a surge in 9-1-1 and non-emergency public safety calls in Fairfax County.

The county is urging people to call 9-1-1 only if there is an emergency.

Due to the existing high winds, call volumes to 9-1-1 and the non-emergency public safety lines are extremely high. This is resulting in higher wait times. Please only call 9-1-1 for life threatening emergencies. pic.twitter.com/3oNhZIktzI

At least 76 traffic incidents have also been reported due to the ongoing weather, including events at the Route 50 and Prosperity Avenue intersection, according to Providence District Supervisor Dalia Palchik.

Earlier: More than 2,000 people in Tysons have lost power due to strong wind gusts that have pummeled Northern Virginia this afternoon (Friday).

According to Dominion Energy’s outage map, one of the biggest outages in the Tysons area is north of the Dulles Toll Road to the Potomac River, where 1,073 customers are currently without power. A crew has been dispatched to the area, but the cause of this outage is pending investigation.

An additional 1,084 people along Route 7 between I-495 and Spring Hill Road have also lost power. The outage has already been attributed to the wind storm, and a Dominion crew is awaiting assignment.

Among those affected by the Route 7 outage is the Tysons District Taco (1500 Cornerside Blvd), which announced at 5:34 p.m. that it has closed until further notice after losing power.

Store Update: Our Tysons location has lost power and is closed until further notice. Stay safe out there, amigos!

Dominion Energy estimates that power could be restored throughout the area any time between 7 p.m. and midnight.

The National Weather Service issued a Wind Advisory that took effect at noon and was later upgraded to a High Wind Warning, which will remain in effect until 2 a.m. tomorrow (Saturday). Even though no rain or thunder was anticipated, the agency issued a Severe Thunderstorm Warning at 4:38 p.m., saying that wind gusts could reach up to 60 miles per hour.

“Damaging winds will cause some trees and large branches to fall,” the NWS said. “This could injure those outdoors, as well as damage homes and vehicles. Roadways may become blocked by downed trees. Localized power outages are possible. Unsecured light objects may become projectiles.”

The Severe Thunderstorm Warning expired at 5:15 p.m., but local residents could be dealing with the storm’s impact well into this evening.

Due to high winds several trees and power lines are down all over Fairfax County// Please be careful when driving and expect delays pic.twitter.com/p0yXUKFBF7