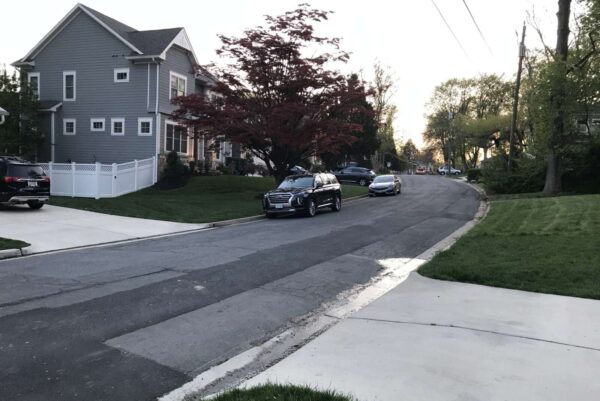 When former Vienna Town Councilmember Maud Robinson died in 2019, she set aside much of her estate to pay for sidewalks throughout town.

At the time, town staff projected that the money would fund 22 stretches of sidewalk totaling about 3.3 miles. Vienna would front the costs for these projects and accept the trust in the form of reimbursement.

Two years later, the town council has approved four eligible roads but have deferred six others in response to objections from neighbors, who have argued that the sidewalks are unnecessary, would encroach on precious driveway space, affect their trees, or place a burden on residents to maintain them.

At this rate, those close to the initiative are feeling the pressure of a deadline. Vienna has until fall 2024 to use up the Maud Ferris Robinson Charitable Trust.

Town staff estimate it could take up to two years after a street is identified to complete a project, and no construction has started, meaning no money can be transferred. A few town council candidates have also highlighted the importance of using the bequest.

“We are remaining optimistic [but] we do know we need to hit the accelerator button on that a little bit,” Vienna Public Works Director Michael Gallagher said.

The town is poised to take a step forward soon, with several sidewalk projects set to go before the Vienna Town Council next Monday.

Two are designed and ready for construction, which would cost nearly $320,000 combined, and there will be a public hearing for nine other projects.

Those nearing the construction phase are Cabin Road SE from Glyndon Street to Branch Road and Pleasant Street SW from east of Maple Avenue to Surveyors Court. Another two could be ready for final approvals in May, according to Gallagher.

The nine slated for a public hearing and the first round of approvals are:

Even though it seems like it’s moving slowly, Andrew Jinks, Vienna’s transportation engineer, says the timeline will still be shorter because the town will not have to do the time-consuming work of navigating state and federal regulations.

“That is a significant benefit,” he said.

As of early 2020, the town had roughly 85 miles of sidewalk. The Robinson trust focuses on filling in missing patches of sidewalks that weren’t already planned for or likely to be funded through other grants.

Right now, the town is only identifying streets where curb and gutter already exist, since the trust does not cover those components. But Gallagher says his department is considering how to couple the Robinson money with other funding sources for curb and gutter to complete larger projects.

The current sidewalk effort dates back to 2017 when Vienna councilmembers approved the Pedestrian Master Plan, which envisions a network of sidewalks on both sides of all town streets.

While Vienna’s walkway network is robust in the central business district area and many neighborhoods, significant gaps remain, according to the plan.

“Some sidewalks are narrow and have obstructions such as stairs, street signs, telephone poles, and fire hydrants,” the plan said. “Some walkways are little more than narrow asphalt paths and some are brick (cobblestone effect) and are uneven. These obstacles make many of the existing sidewalks inaccessible to families with strollers, wheelchair users, and others with disabilities.”

The town council recently added another mechanism for expanding the town’s sidewalks, approving an amendment that requires developers to build these paths in front of a home, regardless of whether connections exist on either side.

Accommodations for sidewalks have long been a part of town planning. In the 1960s, the town required land to be set aside for a sidewalk, although the council reserves the right to waive construction. Even if the requirement was waived, however, Vienna still considered the land to be town-owned.

“When you have a road that just has a curb and gutter, some people — and it makes sense — think their property goes to the curb,” Gallagher said. “When in reality, a portion of that area is public right-of-way and always has been.”

That means some residents could lose greenery, trees, and shrubs that have technically been planted on public land.

Jinks says Vienna will work with residents to curve sidewalks around trees, transplant them, or replace them.

“In town, we work with the residents far more when it comes to tree impacts and mitigation than other jurisdictions,” Jinks said.

Brian Land, a 30-year resident of Ridge Road SW, said communication has been one of the biggest challenges over the course of the initiative.

“I believe if the town had sent the notice of proposed sidewalk projects out to everyone in town, the support for sidewalks would be much greater,” he said. “Because they’re only noticing the individual blocks being considered for sidewalks, in my view, that tends to motivate the people who are against the sidewalk.”

Angela Sorrell, who sits on the Pedestrian Advisory Commission, said she empathizes with neighbors who have landscaping in the town’s right-of-way.

“Right now, there’s hesitancy for change,” Sorrell said. “Let’s see what the design looks like and then work together to find a solution that keeps residents pleased with the aesthetics and provides safe walking routes.”

Sorrell lives on Plum Street SW, one of four streets that have been approved for sidewalks:

“I am thrilled that sidewalks are getting to be installed this spring on our street,” Sorrell said. “We feed to Vienna Woods [Swim & Tennis Club] and there are so many kids who walk, bike or scoot to the pool.”

“I’m hoping that council will give us guidance to put those back into the queue,” Gallagher said. “I think it was because there wasn’t enough support. We’ll see how the meeting on the 26th goes. Hopefully, we’ll be able to break through that log jam.”