Following in the footsteps of his Fairfax County counterpart, Falls Church City Manager Wyatt Shields is proposing a one-cent reduction in the real estate tax rate as part of the city’s advertised fiscal year 2022 budget.

However, because of rising assessed values, the average homeowner will still experience a $291 increase in their tax bill next year.

Presented to the city council on Monday (March 8), the advertised budget increases city government operating expenses by 2.3% (or $946,567) and public schools funding by 2.5% (or just over $1 million).

“With vaccines rolling out, and springtime in the air, we need to maintain vigilance but certainly have optimism toward the future — and hopefully, this budget reflects that as well,” Shields said.

Falls Church City School Board Chair Shannon Litton called the proposed $1 million funding increase for FCCPS “a bit better than we expected, given COVID-19.” The school division will also be receiving an additional $20,000 from the state and $31,000 from the federal government, she said.

Shields said the budget keeps revenues in line with forecasts from December without proposing a larger increase on residential real estate taxpayers. The city saw year-over-year increases in taxes on groceries and online sales, but a large decrease in revenue from hospitality taxes.

Highlights of the budget include funding for:

Shields has also proposed increasing stormwater management rates by 2%, or $4, for a median homeowner to pay for projects intended to address smaller-scale nuisance flooding. He anticipates that the city will need to increase rates by 10 to 15% for the next five years to fund six larger-scale stormwater management projects. 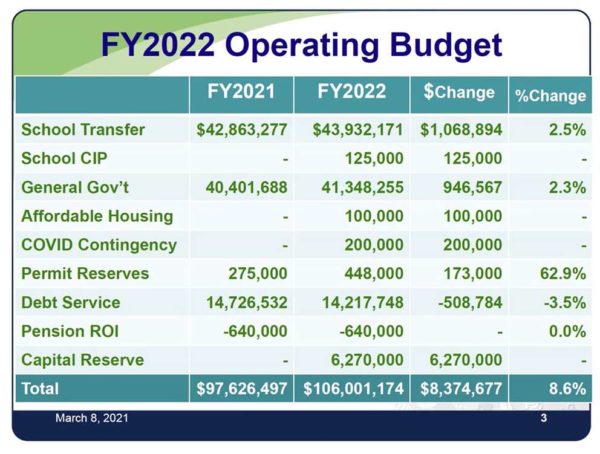 The advertised budget gives Falls Church City employees a 3% merit compensation increase, and a 3.5% step increase to uniformed police staff, but Shields told the city council on Monday that this small-scale growth is not sustainable in the long-term.

“My budget guidance for six years in a row was to keep non-personnel expenses flat,” he said. “So, it is really important to emphasize that after six years in a row of doing that — in addition to cuts made last year due to COVID-19 — our budgets are extremely lean.”

The city has about $3.94 million in unfunded needs across all departments, he said. These range from adding positions, including police officers, IT staff, and economic development staff, to maintaining public amenities, such as basketball and tennis courts and athletic fields.

In addition to flood mitigation, other public safety spending includes investments in sidewalks, paving — which Shields said has been underfunded since the Great Recession — and neighborhood traffic calming activities. State grants will pay for improvements to the Park Avenue “Great Streets” project, the Oak Street Bridge and the Washington and Columbia intersection.

The city will also receive funding through the Biden administration’s American Recovery Act.

“That congressional aid [is] needed and necessary, and we will use it very well for infrastructure and capital needs,” Shields said.

Community members will get a chance to learn about the budget and share their comments at a town hall from noon to 1:30 p.m. on Thursday (March 11). Budget meetings will be held on March 22 and April 12, and there will be a second town hall on April 15 before the city council is slated to adopt the budget on April 26.