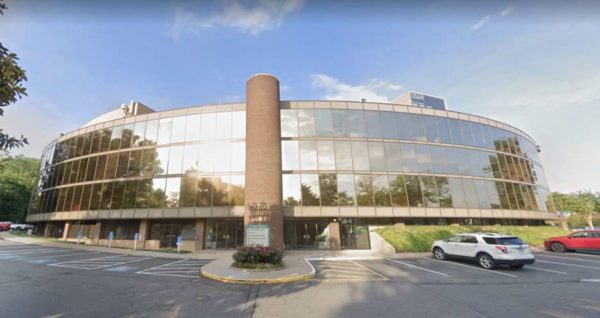 A luxury townhome developer wants to supplant an office complex on Leesburg Pike in Tysons with more than 100 units of housing.

EYA Development has submitted a rezoning application and development plan to Fairfax County seeking to build 104 single-family, attached dwellings on a 6.7-acre site at 7700 Leesburg Pike that is now occupied by a 150,000 square-foot commercial building that was constructed in 1976. The property owner, S.C. Herman & Associates, is also listed as an applicant.

Submitted on Dec. 15 and accepted by the Fairfax County Department of Planning and Zoning last Friday (March 5), the application proposes rezoning the commercial site to the planned development housing district.

Under a PDH-16 zoning, the site would have a maximum density of 16 dwelling units per acre and require 281 parking spaces, which EYA says would be provided with two garage spaces for each housing unit and 73 surface spaces.

The plan features three dedicated open spaces on the north end of the site: a central courtyard with a pergola and terraces called The Green, a fitness area, and a playspace with a cherry tree grove, rain gardens, and birdhouses.

In terms of infrastructure, the development will include internal private roads with an exit to the south onto Leesburg Pike, and the site plan envisions 10-foot crosswalks across George C. Marshall Drive and a future road to the property’s east side that is included in the Fairfax County Comprehensive Plan.

EYA notes in the plan that illustrations showing the future road are to demonstrate that the proposed development can accommodate the road but “is not a commitment for the applicant to construct the future road or infrastructure.”

The developer also says its proposal would not preclude any potential widenings of Leesburg Pike, and it plans to dedicate a portion of the site area for future road improvements introduced by a Route 7 bus rapid transit system.

“To the best of our knowledge, the proposed development will not pose any adverse impacts on adjacent properties,” the applicants say in the development plan.