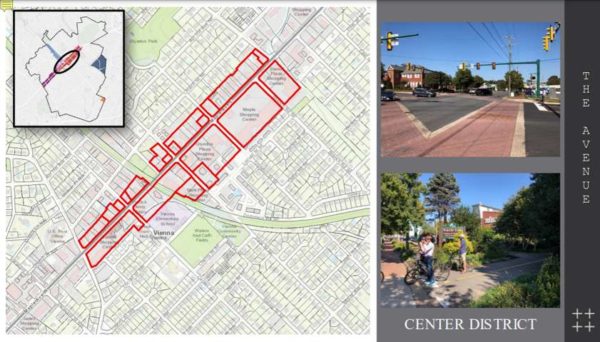 Vienna leaders got their first chance this week to weigh in on potential updates to the town’s commercial zoning rules.

The Vienna Planning Commission and Vienna Town Council held work sessions on Wednesday (Feb. 3) and Thursday (Feb. 4), respectively, to discuss proposed changes to the districts that dictate what businesses and other non-residential properties look like and where they can be located.

As part of the town’s massive Code Create Vienna zoning code overhaul, the consultant ZoneCo previously met with the planning commission and town council in December to talk about possible updates to standards for residential zones. A community survey on those proposals will remain open until Feb. 19.

However, ZoneCo believes non-residential zones are where Vienna has “the greatest opportunity for noticeable and impactful change,” according to a Jan. 26 memo to town leaders.

“Updated, modern, easy-to-use and administer zoning districts particularly calibrated to desired development patterns and character, along with a modern list of uses, will enhance the quality of development and life for Vienna’s residents and businesses,” ZoneCo lead principal Sean Suder said in the memo.

To help organize the town’s land use, ZoneCo proposes simplifying and consolidating some of Vienna’s existing non-residential zones into districts that are mostly based on their geographic location and can be more easily adjusted as the area evolves.

For instance, the existing pedestrian commercial zone would become the Church Street District, and the limited industrial zone would be renamed as the Mill District to reflect its alignment with Mill Street. 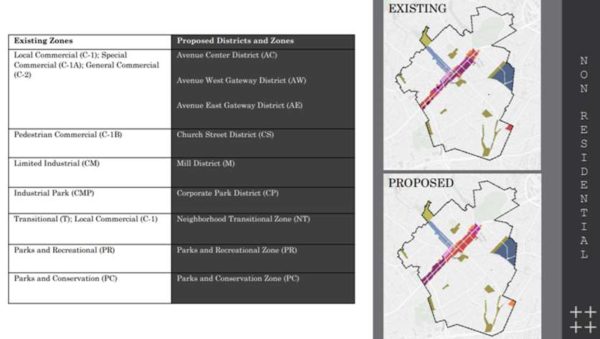 The most substantial change proposed by ZoneCo is a consolidation of the town’s special and general commercial zones into an Avenue Center District that would extend the “pedestrian-oriented context” of Church Street to Maple Avenue “to create a more pronounced and stronger Town center.”

Concentrated in the section of Maple between Vienna and Danor Plaza shopping centers, the district would consist of small-scale ground-floor retail, upper-floor commercial, multi-unit residential, and boutique hotels. Larger-scale retail would be allowed only with a conditional use permit.

“While Maple Avenue will remain a busy regional connection to and from Tysons, this portion of the Avenue provides the greatest opportunity for pedestrian orientation,” Suder said.

The Avenue Center District would be flanked by East and West Gateway Districts that would permit more large-scale retail and other commercial uses, such as daycare and assisted living facilities.

ZoneCo also suggests using a zone-oriented approach for places that have similar development patterns but are less geographically focused, such as the transitional areas between the town’s commercial corridor and single-family residential neighborhoods. 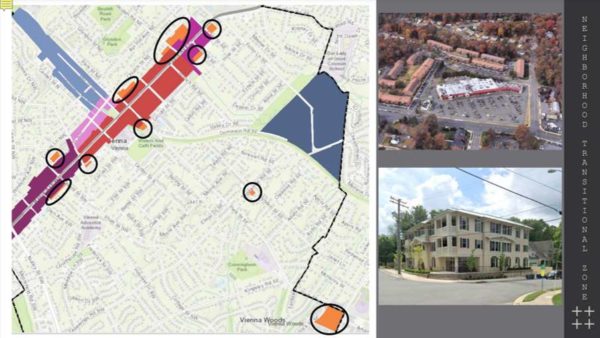 ZoneCo says it designed the districts and zones based on Vienna’s comprehensive plan, whose goals for non-residential development include maintaining a balance of land uses, encouraging a vibrant central business district, and creating a more walkable and bikeable town.

“A new set of consolidated, geographic and context specific commercially focused districts will allow for desired development patterns to be more particularly calibrated now and into the future,” the memo said.

Vienna kicked off its zoning code and subdivision ordinance update in September, but the effort has been in the works for a while, as the stalled Maple Avenue Commercial zone illustrated the challenges of pursuing new development using 50-year-old regulations.

Images via Town of Vienna/ZoneCo