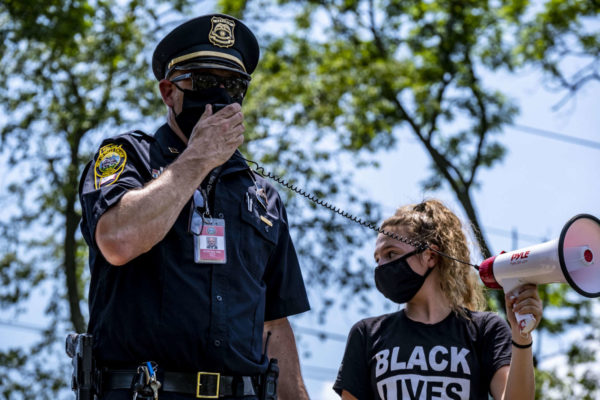 The Falls Church Use of Force Review Committee is nearly done compiling experiences and reviews of policies and investigations for a report on how police officers and sheriffs utilize force in their work.

The report is slated to go before the Falls Church City Council on Feb. 22 and will address the committee’s findings from pouring over 113 reports of uses of force by local law enforcement, nearly 400 community responses to a survey about experiences with officers, and the department’s policies governing the use of force.

It will also include 10 recommendations, ranging from procedural changes to community engagement.

The committee reviewed the results from the community survey, which drew 393 responses, last night (Wednesday).

“We would have loved to receive comments from every last citizen within the City of Falls Church,” Committee Chair Janis Johnson said during the meeting. “We did not, so we do appreciate those folks who were able to take time out to respond. It does inform the committee’s work and helps us validate some of our recommendations and discussions.”

The most-represented respondents were white women between the ages of 35 and 64, and 111 respondents identified as non-white or withheld their demographic information.

Committee vice chair Brian Creswick said the number of responses was encouraging, and neither the demographic percentages nor the distribution of answers surprised him. Broadly, he said the results of the survey mirror what the committee has found after reviewing policies and use of force reports.

“There was a generally positive view [of law enforcement],” he said. “I think there was a slightly more negative view among minority populations. I don’t want to editorialize whether it was significant or not — the numbers showed a decrease.”

Across the board, more than 96% of respondents said they had not experienced force by the Falls Church Police Department or sheriff’s department. Nearly 90% of respondents reported never seeing law enforcement use force, but among people of color and people who did not specify race — two groups that were combined in the committee’s data breakdown — the share was lower at around 77%.

About 10% of people of color/people who did not specify race said the police or deputies they interacted with displayed poor or very poor levels of professionalism. That was twice as high as when white people were included in the overall rate.

Around 85% of respondents said the police department and sheriff’s office keep the city safe. About 81% of people of color/unspecified race shared that sentiment.

Although nearly 400 people responded, the survey yielded 858 comments, which will be included in the report.

Some comments after the survey indicated feelings toward law enforcement that were not captured by the questionnaire responses. Committee members said the comments indicate some people of color feel targeted by law enforcement and perceive a sense of arrogance among officers.

Public representative Raymond Touomou cautioned against only looking at what the majority said because this group is “overwhelmingly white.”

“One of the best ways is to look at what the minorities think happened to them,” he said. “When I read the results, there were some things that are alarming, and transcend statistical significance…such as kids who report being harassed on their way to and from school.”

Public representative Toni Lewis said the group was intentional about reaching out to minority communities. Although she phoned apartment complexes and churches, she said that “as in many surveys and initiatives, we ran into the problem of engaging the usual suspects.”

“I’ll own that we could have made this better marketed,” she said.

The committee was set to go before the city council in December but requested an extension so it would have enough time to collect data and debrief the results of the city-wide survey with the community.