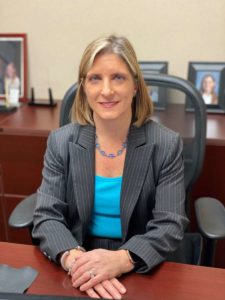 The Town of Vienna has hired a longtime hotel industry worker as its new human resources director.

Michelle Crabtree is taking over as Vienna’s HR director from Maggie Kain, who served in the role for more than six years before retiring today (Monday).

Crabtree is coming to Vienna off of a 15-year tenure working in human resources for the Hyatt Regency in Crystal City, where she also provided support to hotels in Virginia, D.C., and Maryland. Hyatt Regency Crystal City was named a Top Workplace by The Washington Post in 2019.

The Town of Vienna says in a press release that she enjoys working in human resources for the unpredictability and the opportunity it offers to meet and get to know different people.

“When you get to know employees and about their families and what they like, when you develop a relationship with them, then they feel more connected and work harder for the organization,” Crabtree said. “That’s why you’ll find me out of my office more than in it sometimes. I’ll be out getting to know people and learning about their lives.”

Prior to entering the hotel industry, Crabtree spent eight years working at Walmart, where she started as a college intern and worked her way up to becoming a store manager. She went to college at Purdue University, where she graduated in 1990 with a bachelor’s degree in consumer sciences.

“Michelle’s deep experience in human resources leadership and her high level of customer service experience caught our attention, but it’s Michelle’s professionalism and appreciation of the value of employees at every level that set her apart from other candidates,” Mercury said.