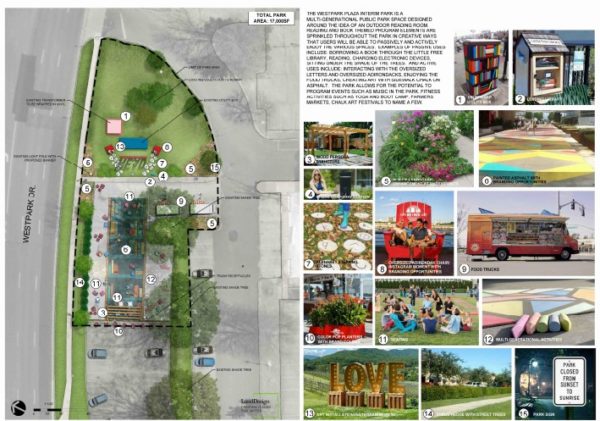 The Fairfax County Board of Supervisors unanimously approved developer Dittmar’s request to add a public park and some 480 parking spaces to Westpark Plaza.

The 2.9-acre site is located at 8401 Westpark Drive north of Leesburg Pike. The parking portion of the interim plans for the site will be in place for five years, while the park will remain during the first phase of redevelopment.

Dittmar’s grand plans to replace the demolished Best Western Hotel that previously occupied the site with two residential buildings, a new hotel, and retail were approved in 2018, but the project is currently idling.

Currently, the property is an asphalt parking lot that the Meridian Group used as a construction staging and parking while work on The Boro development was underway.

The plans for interim parking and a pop-up park have been in place since last summer. The Fairfax County Planning Commission approved the proposal on Dec. 9 before the Board of Supervisors gave the final green light on Tuesday (Jan. 26).

“It is the intent of Dittmar, the owner and applicant, to proceed with ultimate redevelopment,” Walsh Colucci senior land use planner Elizabeth Baker said during Tuesday’s public hearing. “They appreciate having these interim uses.”

The theme of the 16,500-square foot park will be an outdoor reading area, complete with a Little Free Library. It will also have space for food trucks, some phone charging stations, sidewalk chalk art, and other amenities, Dittmar says in its development plans.

The park will activate Westpark Plaza and complement the public spaces at The Boro to the north of the site, Alexis Robinson, a staff coordinator in the Fairfax County Department of Planning and Zoning, said during the staff presentation on Tuesday.

It will remain in place during phase one, which will primarily involve the construction of one of the two planned residential buildings with retail.

“I believe this will be a great addition to the neighborhood,” Palchik said. “It will provide families a new opportunity to engage and be active outdoors, which as we have seen especially this year is in high demand.”