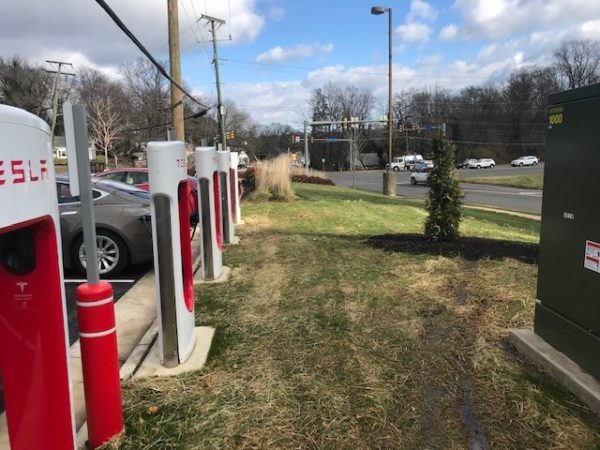 Electric vehicles can now get their batteries recharged at Idylwood Plaza.

Eight individual charging stations have been installed in the Idylwood Plaza parking lot near Tara Thai. It is Federal Realty’s first Northern Virginia property to be outfitted with Tesla’s charging infrastructure and its fourth in the U.S., according to a press release from the real estate company.

“We are excited to host Tesla charging stations at Idylwood Plaza”, Federal Realty Vice President of Asset Management Deirdre Johnson said. “The addition of the Tesla chargers further enhances the variety of options available for EV drivers at Federal properties along Route 7, which includes EVGO at Pike 7 [Plaza] and the Volta charging stations that are becoming available at Falls Plaza later this year.”

Other Tesla Supercharger sites in Fairfax County include the Vienna Wawa, the Wiehle-Reston East Metro Station, and Springfield Town Center. Another site on Route 123 in the City of Fairfax is currently projected to open in the fourth quarter of 2021.

The Tysons area’s network of electric vehicle chargers is also expected to expand this year with a station at Tysons Corner Center from the Volkswagen subsidiary Electrify America.